CENTRAL West NSW farmer Shane Peasley was one of many to lose crops in this year’s near-record Lachlan Valley floods.

His farm, Myall Park, sits between Lake Cowal and the Newell Highway near Forbes.

Three months after the floodwaters arrived, one-third of his 2016 winter crop remains submerged. 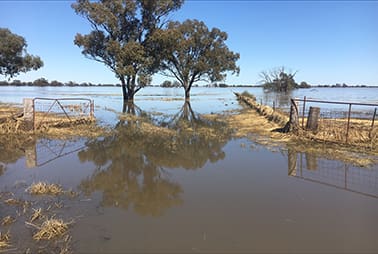 Flooding has wiped out a 300ha crop of Schooner barley on Shane and Natasha Peasley’s property southwest of Forbes. This photo was taken on October 25, and the paddock is still under up to 1m of water.

But as holders of a farm income protection policy, Mr Peasley and his wife Natasha are expecting a payout on their drowned crop, as well as the harvestable area where waterlogging has caused significant yield losses.

“The policy covers 900 hectares in total of wheat, barley and oats. Of that, 200ha was okay, 300ha is still under water and the rest has either drowned or suffered because of waterlogging.”

Mr Peasley will lodge his claim with Latevo once his harvest is off and the grain is priced.

“What the policy will do is pay the gap between the cash value of the grain, and 75 to 80 per cent of our five-year average income per hectare.”

Mr Peasley was one of the first growers to take out a policy when Latevo made it available in 2014.

He remembers the 1990 flood, when it was too wet to plant a crop, and has learnt first-hand about the impact of drought and frost on yields.

“With low grain prices, it doesn’t take long to get into a loss situation, and with the payout, I’ll have enough to cover my input costs for next year, and the bank will get paid.”

Mrs Peasley said the policy underwrote grain values in a way which had not been accessible since AWB removed its Guaranteed Minimum Price for pooled wheat in 1990. 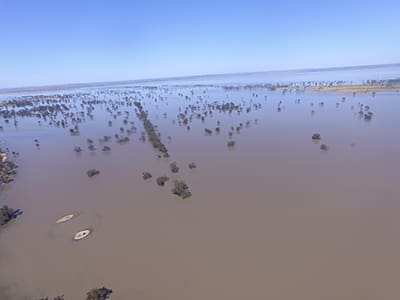 Forbes farmer Shane Peasley said the spring floods have turned 300ha of Schooner barley planted in the paddock in the foreground into “duck food”. Lake Cowal can be seen in the distance at right.

The Peasleys’ policy was one of 56 Latevo has written for farms across Australia in 2016 to cover crops against damage caused by severe weather events like drought, frost, flood and insect and animal damage.

Latevo CEO Andrew Trotter admits the farm income protection product, previously known as multi-peril crop insurance, has been slow to gain custom since its launch in 2014, when 30 farmers took out policies and paid $1.5 million in premiums.

At a premium that costs farmers less than four per cent of their average income, he cannot understand why.

“That’s cheaper than what a nurse or teacher pays for their income protection insurance, and yet farmers are prepared to go without it,” he said.

“The result for some farmers is that instead of buying insurance, they are selling the farm.”

Look deeper and payouts enable farmers to continue being part of their local, regional, state and national economies, and provide security for their family, an important consideration for Mr and Mrs Peasley and their children.

For the free daily email click on the following link: Get our free daily cropping news straight to your inbox – Click here

From a government point of view, farm income insurance is shaping up as an economic and social preventative health measure.

That is why a NSW Independent Pricing and Regulatory Tribunal (IPART) report has found farm income protection has the potential to play an indirect role in decreasing farmer reliance on government payments during drought.

One option IPART has put up for consideration by the NSW Government is a five-year program offering an upfront subsidy program for farm income protection policies.

Under the proposal, a 50pc rebate to approved farmers of up to $30,000 per farm would be payable in its first two years, followed by a 25pc rebate capped at $15,000 for the final three years.

Mr Trotter said while farmers were by nature risk takers, the risk they were taking through habitually not insuring any part of their income was unnecessary.

“Hoping for the best is fine, but you have to plan for the worst, and if you take out a policy to take out the downside so you can’t go backwards, you are protected against the worst.”

Mr Trotter said he had “gone right across the country a couple of times” to drum up interest in the policy.

“There has been plenty of tyre-kicking, but it’s very hard to change the habits of most farmers and get them to spend money on something they haven’t spent money on before.”

He has found most farmers, especially senior ones who have not worked in off-farm businesses, and banks, struggled to see the value in farm income protection.

He said farmers in medium-rainfall areas across Australia’s winter-crop belt who had considered the misfortunes of others wrought by weather events of 2016 were most likely to take out income protection insurance for their 2017 crops.

“They need to feed their crop to get maximum yields, and this comes with a large financial risk; these are the farmers who seem to better understand the advantages.”

Before Latevo writes a farm income insurance policy, it conducts due diligence for a set and one-off fee of $5000 which is payable by the policyholder.

A 50pc rebate on this outlay is now available as part of the Managing Farm Risk Programme announced earlier this year by Deputy Prime Minister and Minister for Agriculture and Water Resource, Barnaby Joyce.

Mr Trotter said feedback on the rebate had been favourable.

“Clients who have applied for the rebate have had refunds processed within 14 days,” he said.

“It was a program designed by the Minister to assist farmers to participate in the program and it’s now starting to get traction, especially in WA.”

Due diligence involves the grower providing Latevo with five years’ worth of financial statements.

Against this, the grower can claim costs involved in running the farm business for the year; this includes expenditure on seed, fuel, fertiliser, chemicals, wages and interest.

“That’s what makes the policy work; we are not about managing loss ratios by denying claims. Since inception, no claim has ever been denied and the Latevo approach ensures it will always be that way.”

While crop insurance has been around for years, it has covered only events like hail, fire and overspray; this type of insurance has traditionally been purchased by around 80pc of farmers.

“Now farmers have an affordable option to cover perils like drought, flood and frost as well.”

The Mace family are farmers at Nindigully in south-west Queensland, and claimed on their policy when drought hit in 2014. Read about their experience here.