FACED with a shortage of storage space in local silos and a surplus of low-value grain, a southern Queensland livestock and cropping farmer is exploring the novel solution of setting up a home-grown, on-farm grain storage facility using shipping containers. 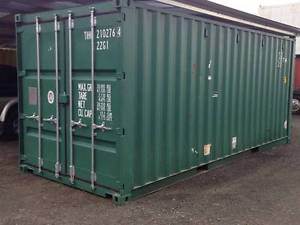 Charles Nason hit upon the idea of standing 20-foot shipping containers on their ends to create a simple, cost-effective way of storing the grain on his Roma farm Banoona in a season when other options have become limited.

“I was going to deliver barley to Roma but, because there were no deliveries of barley, the decision was made by GrainCcorp to use the shed for wheat,” he said.

“Most if not all of the few depots accepting barley east of here are full or near full so there are very few options to deliver.”

Mr Nason considered a number of other on-farm storage alternatives:

– Silos: “all manufacturers booked out till next year”;

– Hole in the ground, possibly lined and covered: “getting grain back out may be an issue”.

So, the idea of using 20-foot ‘bulka’ containers that could be stood on their ends and filled through a hatch in the top may be the answer Mr Nason has been looking for.

“Containers are sealable so that solves the weevil issue and thus can be permanent storage,” he said.

“If you had a 40ft container you would need an 80ft auger, so you are realistically restricted to a 20ft container to stand up.

“It would need some modifications to fill, empty and access. Before you fill it up you must cut an access hatch in the bottom so you can get an auger in to unload it.”

Mr Nason said a 20ft container was about two-thirds the price of a 40ft, so the cost per tonne of storing grain would be higher with the smaller container.

Mr Nason said with cattle worth feeding, many cattle producers were considering ways to store cheap wheat, barley, oats, and even downgraded pulses.

“Most do not have storage, but containers offer a cheaper and more available option to silos,” he said.

He said a limitation of the container concept, apart from the need to have an auger, was that producers would need access to a crane to stand the containers on their ends.

If you have a novel, homegrown idea for storing grain, we’d like to hear about it. Please send details to Grain Central: [email protected]