FOLLOWING the first outbreak of anthracnose disease in commercial lupin crops in NSW last year, the state’s growers have been advised that lupins can be grown outside a small zone of infected properties in southern NSW if they adopt a five-point management plan. 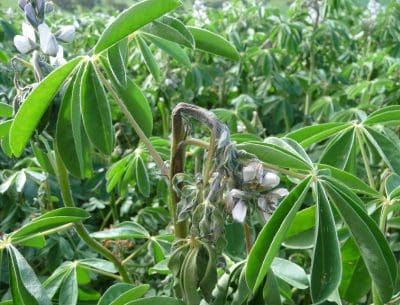 This season lupin growers will be on the lookout for this distinctive shepherd’s crook distortion caused by anthracnose.

NSW Department of Primary Industries (DPI) plant pathologist, Kurt Lindbeck, said all albus and narrowleaf lupin growers should closely follow the plan, which aimed to reduce the opportunities for the establishment and spread of anthracnose.

The five-point plan advises growers to:

Western Australian research, where the disease has been present for 21 years, found foliar fungicides containing mancozeb, chlorothalonil or azoxystrobin were effective in managing the disease, which is caused by the Colletotrichum lupini fungus.

Anthracnose affects only lupins. Albus lupins are particularly susceptible to the devastating disease.

Dr Lindbeck said anthracnose could develop at all crop stages, including seedlings. 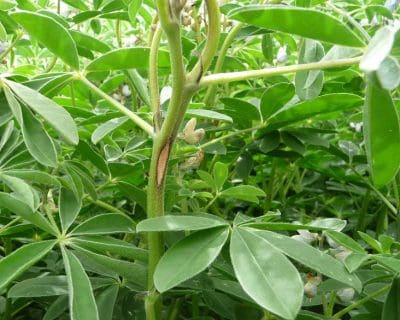 Early anthracnose stem lesions, with the pink to orange spores which can be seen in crops prior to collapse of the stem.

“Growers and advisers should inspect lupin crops for anthracnose symptoms, which are most obvious when crops start flowering and podding, producing bent and twisted stems to form a shepherd’s crook shape,” he said.

“Stems bend due to lesions, with bright pink to orange spores found in the bend of the crook, which spread through the crop onto growing plant pods and infect developing seed.

“Anthracnose develops in hotspots throughout the crop and can spread by rainsplash.”