SOUTHERN NSW faba bean growers are being urged to carefully consider paddock selection this season and plant in the recommended sowing window to maximise yield potential. 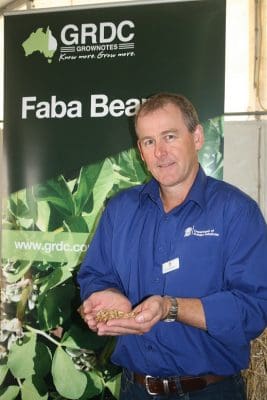 “A large portion of the dryland and irrigated grain growing areas in southern NSW are well suited to faba bean,” Mr Richards said.

“Despite last year being a very wet season across southern NSW, faba bean proved the best adapted pulse to withstand short to moderate periods of waterlogging.

“In 2016 during the growing season rainfall from April to October the rainfall across southern NSW was approximately 80 per cent to 90pc above average, ranging from 625 millimetres at Wagga Wagga in the east to 517mm at Rankins Springs in the western cropping area.

“This made for ideal growing conditions throughout the season on well drained country and particularly during the flowering and pod fill period contributing to high yielding pulse crops.”

Looking ahead Mr Richards urged growers to make paddock selection the major management consideration, paying particularly attention to soil type, as well as varietal selection and planting in the recommended sowing window for their region.

“Recent surveys of commercial faba bean crops in south-eastern Australia have attributed poor root growth and nodulation on slightly acidic soils (i.e. 0–10 cm soil pHCa test less than 5.5) to pH stratification and acidic layers ranging from 4.1 to 4.8 in the top 5–15 centimetres,” he said.

“While pH stratification occurs naturally, it is more severe under no-till systems where lime has been top dressed but not effectively incorporated.”

“Our results prove that sowing time is the most critical management factor for faba bean production in southern NSW even in favourable springs with high rainfall,” Mr Richards said.

“Sow from 20 April to 15 May in this region. Aim for the first half of this window, especially in western areas or on acidic soils. This maximises yield in crops that produce 6-10t/ha dry matter with harvest indexes of 30pc to 35pc.”

He said crops have been successfully grown when sown up to a week earlier than April 20.

However, he warned growers this increased the risk of yield loss from both frost damage and disease due to increased biomass under favourable, mild winter growing conditions.

“But in contrast, sowing later than the sowing window can expose the slower-maturing crop to moisture and heat stress at the end of the season, resulting in shorter plants, reduced biomass and number of flowering nodes, fewer pods, lower height of bottom pods, harvest difficulties and low yields.”

“However, if sowing later in the sowing window, it becomes important to increase seeding rates to 30–40 plants/m2 to maximise yield potential in a short spring,” he said.

“PBA Samira and PBA Zahra are recent releases and higher yielding than Farah and Fiesta VF. Both have good resistance to ascochyta and are less susceptible to chocolate spot and rust than Fiesta and Farah,” he said.

While he said PBA Nasma was a variety released for northern NSW which has performed very well in the south in recent seasons.

Whilst it is susceptible to both chocolate spot and ascochyta blight, it appears that if current disease management guidelines are followed, it has high grain yield potential in southern NSW.

Research has shown that PBA Nasma has a significantly longer flowering period than PBA Samira and PBA Zahra.

This wide flowering window results in a significantly larger number of podding nodes, and therefore potentially higher yield, and some insurance against environmental extremes during flowering.