FROST over recent months may have cost southern Australian croppers close to $200 million as harvest begins to reveal the full extent of the damage. 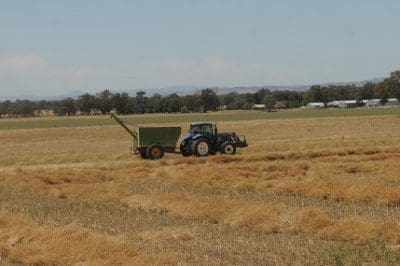 Agriculture Victoria last week came up with an estimate of $100-$180 million in losses due to frost events in September, October and November but its regional manager for grains in the south-west, Rob O’Shannessy, said that was now looking “conservative”.

About 60 people including bankers, rural finance advisers, farmers and agronomists attended a meeting at Kalkee, Victoria, late last week to talk about frost damage to crops with an emphasis on lentils and peas.

Mr O’Shannessy said the difficulty with frost damage to these crops was that the frosted grains were identical in size to non-frosted lentils and peas, meaning it was extremely hard to grade them out.

Farmers were being advised to store all their frost-affected lentils and peas until traders worked out a market for them as they “currently did not have a value”.

The damage to lentils and peas was in a wide area spanning the St Arnaud, Donald, Warracknabeal, Kaniva, Horsham and Stawell districts.

Crops in those areas were affected by what is being called a “black frost” which thankfully did not seem to damage wheat or barley crops as they were too far advanced in that area.

But further south, it is a different story with some farmers reporting 100 per cent losses in wheat.

Those areas badly affected include Skipton, Lake Bolac and Tatyoon where farmers are reporting losses of 50-100 per cent.

And in the Riverina in southern NSW, there are pockets that have suffered badly from frost too.

There is a report of one farmer harvesting 100 hectares of canola to get just four tonnes of grain from the entire area.

Farmers who might have escaped frosts will be anxiously watching the skies with predictions by the Bureau of Meteorology of 25-100 millimetres of rain in the next eight days.

This week’s rain will almost certainly decrease the potential of crops which were already tracking to be lower yielding that last year.

The Grain Industry Association of Victoria (GIAV) crop tour in October, sponsored by Perkins and Co Resources, looked at 305 paddocks of wheat and barley across Victoria and southern NSW.

About 35 grain merchants and analysts, agronomists and students travelled a combined 11,800 kilometres to assess crop potential.

Their overall assessment was that wheat yields across Victoria and southern NSW would be down an average of 20pc, while barley yields would be back 16pc.

In a breakdown of regions for wheat yields, the Wimmera fared the best with predictions of an average of 3.64 tonnes/ha, back just 6.2pc on last year’s record prediction.

The GIAV also made the following predictions on estimated yields:

“We then were hit with frosts and the effects of those late frost events will also have to be factored in to decreased yields,” Mr Peace said.

Mr Peace said the figures initially derived from the GIAV tour could be an over-estimate of up to 25pc in some areas if frost damage was very bad.

He said the annual GIAV tour was valued especially by grain traders who wanted to get a feel for what potentially could happen at harvest.

“Grain traders will do their own touring, but no one does it on the kind of scale that we do, and it really does give an indication of the potential of crops,” he said.