THE Grains Research and Development Corporation (GRDC) will explore all research and development options to see if there is more it can do to help growers manage the huge impact of frost. 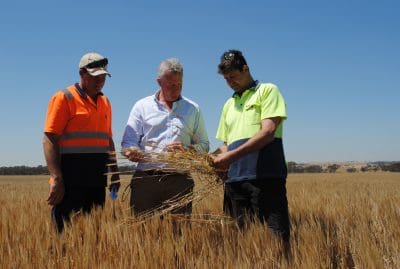 This is the message from GRDC managing director, Steve Jefferies, who recently visited frost-affected areas of Western Australia’s grainbelt to view damaged crops firsthand and speak with growers.

Dr Jefferies, who took up his position with GRDC in July and was previously chief executive officer of plant breeding company Australian Grain Technologies (AGT), said he saw examples of very severely damaged crops during the two-day tour in WA.

“In an extraordinary year like this, when there have been so many damaging spring frosts with temperatures as low as -7 oC at regular intervals over extended periods covering flowering and grain fill of most crops, it is unlikely any risk management strategy could have had a significant impact on reducing frost damage,” he said.

“However, I was keen to get feedback from growers about what they have experienced this year as well as what the impact has been of various risk management strategies they have adopted in the past – in terms of what works, what doesn’t and which ones could make a difference in years when frosts are less extreme.

“I wanted to gain information ahead of a review that the GRDC will undertake in coming weeks of our extensive frost research investment portfolio of more than $24 million in contracted research projects.

“We want to identify any gaps or anything that looks promising that could be fast-tracked and the input from growers on this tour will be an important consideration.”

Dr Jefferies said observations from growers and some preliminary research results were suggesting that sowing rates; nitrogen application; potassium application; different stubble management techniques; and some soil amelioration practices were all influencing the impact of frost on crops.

“This warrants further research to gain an improved understanding of the financial value to growers of various risk management strategies,” he said.

Frost is a major research, development and extension (RD&E) priority for the GRDC and its investment is managed through the National Frost Initiative (NFI).

“This initiative combines research into improved levels of crop tolerance through genetics and breeding; assessing the impact of different management practices on frost severity; improved understanding of environmental and landscape variables on frost severity and more,” Dr Jefferies said.

“The aim is to be able to deliver a range of tools that can assist growers in managing frost risk.

“It is unlikely, at least with current technology, that we can achieve spring radiation frost tolerance in our crops to temperatures much lower than -2 oC.

“However, frost tolerance improvements of -1 oC or -2 oC would still be very valuable.”

A major project in the NFI genetics program led by Tim March from the University of Adelaide (UA) oversees R&D into frost phenotyping and pre-breeding.

Through this program, the grains industry now has a field frost screening method that is robust, accurate and able to be reproduced.

In the first phase of this project researchers from the Department of Agriculture and Food and UA have used the data collected by this screening research to rank wheat and barley varieties for relative susceptibility to spring radiation – or reproductive – frost, which occurs in late winter and early spring.

While all varieties are susceptible to frost, some are a little more susceptible than others and this knowledge may assist growers in selecting slightly lower risk varieties for the high-risk areas of their farms.

This could be a component of a more comprehensive plan to manage the risk associated with frost.

In the next phase of this project, the work will be expanded to screen thousands of wheat lines from around the world – initially selected using a focussed identification approach to pinpoint lines from parts of the world that regularly encounter spring radiation frost damage similar to that experienced in Australia.

These will be tested during the next five years, with the aim of identifying the most frost tolerant genetics for future breeding programs.