THE relentless heatwave conditions that have gripped north-west NSW since the beginning of the year are doing dryland cotton farmers no favours as crops start to show the strain. 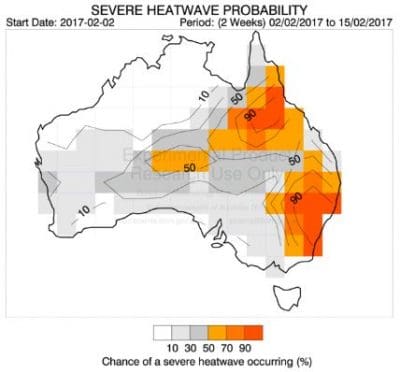 The cotton-growing valleys of the Macintyre, Gwydir and Namoi Rivers, where there has been the biggest dryland plant since the 2010/11 season, have borne the brunt of the heat extremes.

And there is no respite in sight with the Bureau of Meteorology forecasting maximum temperatures of 38 degrees and above for the key cotton centres of Dalby, Goondiwindi, Moree, Narrabri and Gunnedah for the rest of this week.

Moree, which has already sweltered through a record 39 consecutive days of temperatures exceeding 35 degrees this summer, is predicted to hit 46 degrees on Sunday.

Cotton Seed Distributors (CSD) extension and development agronomist, Robert Eveleigh, said there was little growers could do to temper the effects on their crops with no rain in sight.

‘Nothing likes it above 40 degrees and we have had so many of them this year I’ve lost count..’

“Nothing likes it above 40 degrees and we have had so many of them this year I’ve lost count. The crops can take the heat if there is moisture to go with it, but most place haven’t had that,” he said.

However, he said it was a mixed bag with some crops in areas where there had been rain, such as the southern end of the Liverpool Plains, or that had got under isolated storms were “not looking too bad”.

“To the west they are particularly ‘fryland’ crops out there. And around Narrabri and Bellata the majority aren’t in good shape, but maybe 20 per cent got under storms in the last few weeks,” he said.

Mr Eveleigh said the heat was not only likely to impact on yields but also have implications for fibre quality.

“My experience is that when you get these sorts of years the fibre length suffers, so length discounts will be common. It can also do some strange things to micronaire, so that could be an issue. Low yielding dryland crops generally have quality issues. It goes hand in hand,” he said.

Adding to the impact on crops, Mr Eveleigh said it had been a big year for sucking pests, particularly earlier in the season.

“They are still around but the heat is getting on top of them now. Mirids and Rutherglen bugs are still there, but their numbers have declined in the dryland crops. They are still ticking along in the irrigated crops,” he said.