THE Federal Government has announced the allocation of $40 million in funding for irrigation projects in Victoria under the government’s $500m National Water Infrastructure Development Fund. 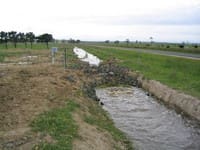 Funding of $20 million will soon flow for the South West Loddon Pipeline in Victoria, with the Australian and Victorian governments agreeing to a schedule for delivery of the project.

The project is expected to generate upwards of 130 jobs, and supply around 780 megalitres of water boosting local water security and agricultural productivity.

It will involve the construction of an additional 1300 kilometres of pipeline to connect West Waranga Channel with the Wimmera Mallee Pipeline.

Once complete, the pipeline will supply around 780 megalitres of water per year to local landholders.

“This drought breaking pipeline will give farmers, who currently rely on rainfall and catchment dams, the water security and confidence they need to increase their agricultural productivity and create an overall economic benefit of $114 million,” Deputy Prime Minister and Minister for Agriculture and Water Resources, Barnaby Joyce, said.

Another $20 million in funding will go towards a project to modernise water infrastructure in the Macalister Irrigation District in south-east Victoria.

The project is expected to increase the area under irrigation, generate a $10.3 million increase in farmgate product each year and create 100 long term jobs.

“This project will overhaul outdated water infrastructure in the Macalister Irrigation District, delivering water savings that will be used to increase supply security and expand irrigated agriculture, generating a $10.3 million increase in farmgate product each year,” Minister Joyce said.

“It is expected that this project will create 208 jobs during the construction phase, and 100 long term jobs in the region as a result of increased farm production.”

The infrastructure upgrade will see open channels replaced with 39 kilometres of pipeline, reducing water losses as a result of evaporation and seepage and saving 9700 megalitres of water each year.

The Macalister Irrigation District is the largest irrigation district in southern Victoria, with an estimated annual economic contribution in excess of $500 million per year.

Irrigated agriculture in Victoria is worth almost $5 billion—more than any other state or territory in Australia.