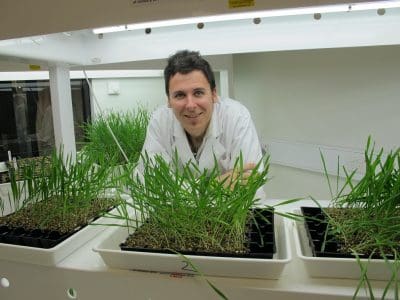 Dr Fran Lopez-Ruiz from the Fungicide Resistance Group (FRG) at the Centre for Crop and Disease Management: “If we act now, we will have more chances of maintaining the efficacy of this group of fungicides for as long as possible.” (Photo: CCDM)

The resistance was found in 2016 crop samples from Victoria and Tasmania by the Fungicide Resistance Group (FRG) at the Centre for Crop and Disease Management (CCDM), a national research centre co-supported by Curtin University and the Grains Research and Development Corporation (GRDC).

The researchers have confirmed the WPM mutation associated with the recently discovered strobilurin (Group 11, QoI fungicides) resistance is G143A, a mutation well known throughout other parts of the world but until now previously undetected in Australia.

In European countries, WPM sensitivity to QoI fungicides was lost within two years of the introduction of this class of fungicide and was due to the G143A mutation.

But scientists say there is still some hope for Australian growers, given the strobilurin resistance was detected early.

“If we act now, we will have more chances of maintaining the efficacy of this group of fungicides for as long as possible,” FRG leader, Dr Fran Lopez-Ruiz, said.

“To do this, growers need to be mindful about what they are spraying on wheat crops.”

He said only two modes of action were registered for WPM control – group 3 (DMI) and group 11 (QoI) fungicides which were already sold in mixtures with a DMI, such as azoxystrobin and epoxiconazole. 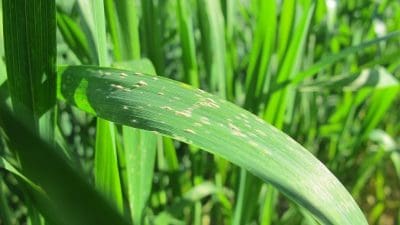 “For WPM, there is currently a high reliance on DMI and QoI fungicides for disease control. With strobilurin resistance in WPM we will have to minimise our use of QoI fungicides,” Dr Lopez-Ruiz said.

“We advise only one QoI spray per year as the only way forward in keeping disease populations from developing very fast widespread resistance to this mode of action.”

If the crop requires additional sprays, Dr Lopez-Ruiz recommends using a DMI formulation that was not in the previous fungicide application, even if that DMI was in a DMI and QoI mixture.

For a full list of registered fungicide formulations, visit www.apvma.gov.au.

“This does raise concerns for an increased use of DMIs which in turn would put even more pressure on a group of fungicides that already have a considerable risk for resistance development. This is why integrated disease management strategies are essential,” he said.

“To protect our fungicides we need to make sure we are rotating them between and within the modes of action.”

“Levels of WPM can be reduced early on by avoiding sowing wheat into infected wheat stubble, selecting wheat varieties with disease resistance, and implementing good crop hygiene such as removing volunteer plants that may carry disease between seasons.”

Dr Lopez-Ruiz said the strobilurin resistance finding was made possible thanks to growers and advisers raising concerns over WPM control in the field, and through the on-going success of the nation-wide disease sampling efforts.

“We were lucky to have picked up this mutation associated with strobilurin resistance in WPM, and it was partly thanks to our sensitive and high throughput laboratory methodologies using digital PCR technology, but without the field reports it would have taken at least another year to detect this problem,” he said.

“We are not sure about the frequency of the resistant population in the field, so we need to work with the grains industry to ensure appropriate disease control management strategies are being put in place.”

“The samples contribute to valuable research and help us understand the spread of resistant populations in the field,” Dr Lopez-Ruiz said.