RESEARCHERS from The University of Queensland have discovered that a key gene which controls flowering time in wheat and barley crops also directs the plant’s root growth. 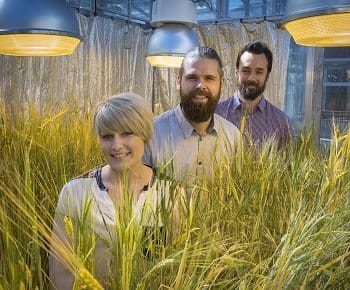 Project leader Dr Lee Hickey from the Queensland Alliance for Agriculture and Food Innovation (QAAFI) said the discovery was a major breakthrough in understanding the genetics of root development and could boost food security by allowing researchers to breed crops better adapted to a range of environments.

“Wheat and barley are ancient crops and humans have been growing them for thousands of years,” Dr Hickey said.

“Over the years, farmers and more recently plant breeders, have made significant progress selecting for above-ground traits, yet have largely ignored the ‘hidden half’ of the plant – its roots.

“Our discovery that the VRN1 gene, which is known to regulate flowering in wheat and barley crops, also plays a role in the plant’s ability to respond to gravity, thereby directing root growth and determining the overall shape of the root system.”

Dr Hickey said this unexpected insight into the underground functions of the VRN1 gene has major implications for optimising cereal crops, as crop varieties with improved root systems could dramatically improve farm productivity.

“A particular variant of VRN1 in barley, known as the Morex allele, simultaneously induced early flowering and maintained a ‘steep, cheap and deep’ root system,” he said.

“This is exciting because flowering time is a key driver for yield and the VRN1 gene appears to offer a dual mechanism that could not only boost crop yield but also improve water and nutrient acquisition through a deeper and more efficient root system.” 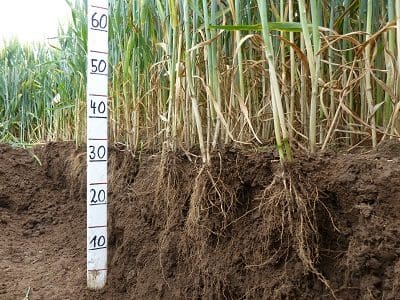 Wheat roots in the field.

The root gene discovery was part of an international collaboration with a team of scientists from Justus Liebig University in Germany, led by Professor Rod Snowdon. The group in Germany provided insight of the gene’s involvement in shaping root development for winter wheats grown throughout Europe, as well as validation of rooting behaviour in field trials.

Another collaborator was Dr Ben Trevaskis from CSIRO who provided important experimental wheat and barley materials critical for validating the gene’s role in root development.

PhD student Hannah Robinson, along with Dr Kai Voss-Fels who has recently joined QAAFI as a Research Fellow, were joint first authors for the study published this week in high impact journal Molecular Plant.

“While our discovery is exciting, more research is needed to identify other key genes involved to effectively optimise root growth in future crops for farmers,” Ms Robinson said.

“Also, we need to determine the preferred root system architecture for different growing regions, which will help plant breeders develop more productive crops, despite the increased variability of future climates,” she said.

The cereal root research at The University of Queensland and wheat phenology research at CSIRO is supported by the Grains Research Development Corporation, who also supported Ms Robinson’s PhD scholarship.

A link to the paper is available here.