AN extraordinary debate has been recently taking place in Europe about the safety of glyphosate.

Glyphosate is the active ingredient in a widely used broad spectrum weed killer that is often better known by its original trade name, Roundup.

Roundup was developed and released for commercial use in 1974 by Monsanto and since then has become one of the most widely used chemicals in agriculture. 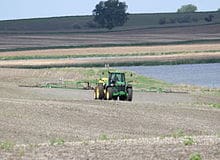 There are many factors in the debate between those who support the approval of glyphosate and those who oppose, ranging from impacts on soil health and the environment to the influence of multinational companies on agriculture.

One of the biggest and most passionate divides however, is the debate around whether glyphosate poses a risk to human health.

The approval of glyphosate as an ingredient in agricultural chemicals by the European Commission has been delayed while several investigations are completed into its safety.

The investigations and extension of the approval process were triggered by a March 2015 report from the World Health Organization’s International Agency for Research on Cancer (IARC) that classified glyphosate as ‘probably carcinogenic in humans.’

The IARC takes a hazard assessment approach to determining whether an agent is a potential carcinogen. That means it is looking at the potential for an agent to cause cancer under theoretical conditions.

Keeping this in mind, it is worth noting other ‘probable carcinogens’ that are placed in the same risk category (2A) as glyphosate by the IARC. They include red meat, hot beverages (over 65oC), shift work, and being a hairdresser or barber.

It is theoretically possible that someone would choose to only eat red meat and nothing else.

Most people would accept that this would be very likely to put that person at a high risk of cancer.

The reality is however that we do not exist on diets of red meat only, so taking a risk assessment approach rather than a hazard assessment approach (which means incorporating real world exposure), it is almost universally accepted that there is an extremely low carcinogenic risk from eating appropriate amounts of meat.

A risk assessment approach to the carcinogenic potential of glyphosate leads to similar conclusions.

In a large study investigating pesticide exposure amongst farming families in the United States, Purdue Extension found an average concentration of glyphosate in urine of people who applied glyphosate to their farms of 3 ppb (parts per billion).

To judge that level of exposure in terms of the ability to do harm, the Environment Protection Authority (EPA) reference dose is a concentration of 90,000 ppb.

A reference dose describes the amount of ‘daily oral exposure to the human population, including sensitive subgroups such as children, that is not likely to cause harmful effects during a lifetime.’

The low level of risk for glyphosate exposure has now been confirmed by European studies triggered by the IARC report with the European Chemical Agency (ECHA) concluding that glyphosate is not a carcinogen and does not pose a cancer risk to humans.

Incidentally, the Australian Pesticides and Veterinary Medicines Authority (APVMA) has also concluded that glyphosate does not pose a cancer risk and has deemed that the scientific weight of evidence indicates that products containing glyphosate are safe to use, as per the label instructions.

It is inevitable however that no amount of reports or data deeming glyphosate to be safe to human health will placate many of those opposed to its use.

A case in point that highlights the extent of the divide on this issue was the recent controversy over the presence of minute traces of glyphosate in wine in America.

A study conducted by the anti-GM group Moms Across America found minute traces of glyphosate in wine.

The highest level found was just under 19 ppb in a Cabernet Sauvignon from a conventionally farmed vineyard.

At that level, a person would have to consume 2500 glasses of wine a day for 70 years to reach the EPA’s level of concern.

The Moms Across America report also does not seem to balance the risk of the glyphosate in the wine with the danger of the wine itself.

Alcoholic beverages are classed in the highest risk category by the IARC as a Group 1 carcinogen (carcinogenic to humans) and the 14 parts per hundred of alcohol (carcinogen) in wine is considerably higher than the 19 parts per billion of glyphosate (probable carcinogen)!

Humans have an inherent risk avoidance mechanism, which we exercise in response to things we do not understand.

Glyphosate is a synthetic chemical made in factories. Wine is made from squeezing grapes. It is perhaps inevitable therefore that a great many people will see greater risk to human health in glyphosate than wine, even when all the available evidence suggests that wine will kill us well before glyphosate ever will.