CANOLA crops are proving the shining light in this year’s winter crop harvest as headers move through the early crops, recording high yields and exceptional oil content in many areas. 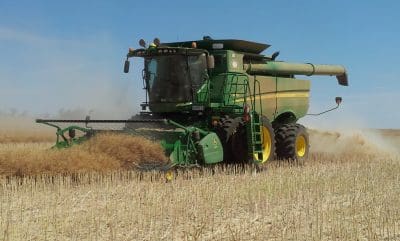 Australia is on track to produce between 3.4 and 3.6 million tonnes of canola this season.

Australian Oilseeds Federation executive director, Nick Goddard, said canola had not suffered to the same degree as other crops from the flooding and disease issues that had affected many parts of the eastern farming zone, or from the frosts that hit Victoria and Western Australia in September/October.

“There has been some frost damage to canola but it is not huge. There have also been some crops lost to flooding. But at the end of the day, overall it is looking very good,” he said.

“Yields and oil quality are very good. The early indications from the early crops is that oil content is very good. There has been a very soft finish to the season with the cool, damp weather. That is exactly what is needed for good oil formation in the seed.”

Mr Goddard said Australia was on track to produce between 3.4 and 3.6 million tonnes of canola this season, up on last year’s 3.0mt-crop, but not as high as some past years of 3.8mt and 4.2mt. 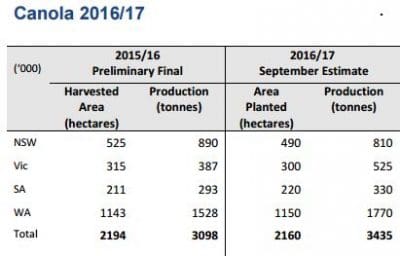 “It is a good, solid number. At 3.6mt, given the relatively low area of canola grown this year because of the relatively large areas sown to pulses, that number is pretty impressive. It is driven by the high yields we are seeing,” he said.

In Western Australia, GIWA spokesman, Alan Meldrum, said canola was the standout crop for yield and quality this year.

While affected by frost, it seems more able to compensate for the effects. Yields recorded to date are above expectations with oil percentage estimates to be around 48 per cent.

Harvest in the Geraldton zone is well underway and is moving down to the Kwinana zone.

The pace of harvest in WA has been slow due to the cold winter and cooler spring, delaying crop development by upwards of three weeks and putting harvest back, particularly in the southern regions.

It is a similar story in the eastern states where harvest is underway in the northern and western districts of NSW and is moving southwards.

“The harvest is a bit delayed. We normally see harvest rolling earlier than this. It has been a slow start to harvest but that has been good for what is needed in terms of oil and fatty acids,” Mr Goddard said.

NSW DPI technical specialist pulses and oilseeds, Don McCaffery, said the mild finish had been the main contributor to some “ridiculously high” oil levels in canola this year.

Mr McCaffery said there had been reports of one crop at Bogan Gate registering 50.2pc oil, with some in the western Riverina going 47pc to 50pc, and many throughout the growing zone achieving over 43pc.

One crop at Boomi in the far north of the state recorded an outstanding yield of 3.14t/ha and an oil content of 45pc.

“The base cut off for bonus payment is 42pc, so people are going to get a little extra payment,” he said.

However, Mr McCaffery said it wasn’t such good news for growers in the areas hit by flooding and waterlogging in September, particularly in the central western region.

“I reckon 60,000 hectares have been lost to waterlogging and flooding in NSW, mainly through the Macquarie and Bland systems, west of Young in a north-westerly direction towards Condobolin,” he said.

There have also been waterlogging issues for crops in other low-lying areas of the Riverina, such as around Barellan and Urana.

Compounding the problem for flood-affected growers, sclerotinia disease has savaged those crops where it has been too wet to get ground-rig spraying equipment onto paddocks.