Grain storage: It pays to think 30 years ahead

FOURTH-GENERATION farmer, Andrew Freeth, and his family have seen their share of fluctuations in seasons, markets and farming practices on their 5000-hectare dryland broadacre cropping and livestock enterprise at Collie in central west NSW. 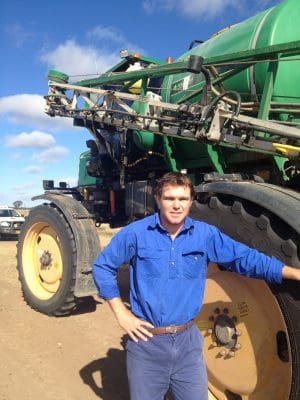 This, as well as a keen interest in changing their approach to improve farming productivity and profitability, prompted Mr Freeth to spend the past two years undertaking a Grains Research and Development Corporation (GRDC) sponsored Nuffield Australia Scholarship.

The focus of his study was investment in on-farm storage, taking into consideration future supply chain logistics over the working life of storage built today.

Mr Freeth visited the United States, Canada, France, Germany and the United Kingdom and said one of the key things he learned was that when looking at on-farm supply systems, growers needed to look to the future.

“When looking at grain storage, I’m talking a 30-years-plus investment, so you need to try and understand what you will need a long way down the track. To me this means looking at your grain supply chain systems, as well as what you are growing and how long you will be storing product,” he said.

“I used my research scholarship to look at whole grain supply chain systems in the UK, Continental Europe and North America, as well as the implications of managing storage in their environments so as to reflect on our own.

“One of the key differences you see in North America is mainline rail systems and efficient rail loading hubs, which over time have become more efficient and pay a higher price to the grower.

“Imagine if a typical Aussie grower could get an extra $10/metric tonne, say on producing 3t/ha and valued at $2000/ha, that would generate an extra 1.5 per cent return on investment.”

Mr Freeth sees potential for better efficiencies and savings for the East Coast in the often-discussed Melbourne to Brisbane inland rail project.

He said one of the major advantages would be that the rail line would be predominately funded by general freight, not just the grains industry.

“There is potential for properly targeted mainline rail to lift the productivity via heavier axle weights and larger train sets. More productive trains would encourage rationalisation and investment in rail loading and port facilities to improve network efficiency,” he said.

“By changing our rail system from state focused networks to a truly national system, Australia could create some great transport efficiencies and cost savings.

“Currently there is a lot of flexibility built into the Australia logistics systems, we use a lot of road transport which makes us a bit more expensive, and our export systems are front-ended so a lot of the grain tends to be exported within six months of harvest.

“If you had a more cost efficient mainline rail and shuttle hub system, growers could be storing product for longer and exporting across a 12-month window.”

However, longer storage has some implications for management, and Mr Freeth said that meant keeping grain in the silo, like money in the bank, and ensuring it remained in good condition.

“If you get it right from the start, with aeration and hygiene, you are 95 per cent of the way there. In Australia there is plenty of extension funded by the GRDC to learn how to get it right, so it’s really important growers upskill and understand best practice storage,” he said.

“For example where grain is staying in storage longer term, the ability to use aeration becomes very important. In the event of pest incursion, you must be able to fumigate in gas tight storage to Australian Industry standards.

“On-farm grain storage is growing and will continue to grow in our country, so it is really important that those management skills increase as well.”

In the UK grain is only transported by road and Mr Freeth said the key thing he learnt was that for road grain movements, grower operated on-farm storage could be very competitive.

“The UK market provides a window into what the Australian market could look like if rail becomes uncompetitive with road,” he said.

“But it is mainline rail that is the driver of whole supply chain efficiency, and one thing that is glaringly obvious is that in Australia we really need a strategic plan to drive this efficiency and achieve the associated gains.”

For more information on grain storage, go to the GRDC extension site http://storedgrain.com.au/