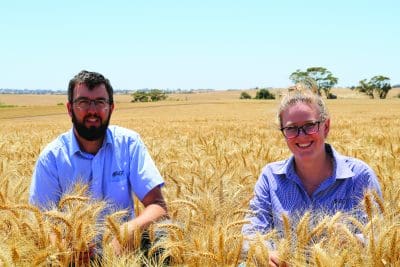 Wheat classifications come via Wheat Quality Australia, which earlier this year approved Catapult as a variety which could be delivered into bulk-handlers AH segregations in South Australia, Victoria and southern New South Wales.

Catapult is being marketed as a good choice for WA growers looking for an earlier sowing option without a yield penalty, and Dr Bennett said its lengthened maturity made it unique.

“AH is the highest delivery grade for wheat in WA, so this allows growers to maximise returns if their grain makes the grade,” Northam-based AGT wheat Breeder Dion Bennett said.

“It takes longer to reach flowering than Scepter and the newly released Rockstar, and therefore can be sown earlier than both of these varieties.”

“We believe growers are likely to be able to plant Catapult a week earlier than they would plant Scepter, offering more flexibility in the sowing program.

Mace and Scepter are two of AGT’s wheat varieties which are already widely grown in WA.

“Mace offered a significant yield step up when it was released, and quickly became the most widely grown variety in WA,” AGT marketing manager Alana Hartley said.

“We then built upon Mace and released Scepter, offering even more improvements in yield and profitability.

“Catapult also has Mace parentage, so shares the same characteristics of high yield and wide adaptation, but we have managed to lengthen its maturity to produce a variety that we regard as an excellent early sowing complement to Scepter”.

Seed growers across southern Australia have bulked up quantities of Catapult this year, and the seed will be available through AGT affiliates and local retailers for commercial sowing for the first time in 2020.

AGT is Australia’s largest seed company, and is owned by the Grains Research and Development Corporation, French company Limagrain, the South Australian Government, and the University of Adelaide.