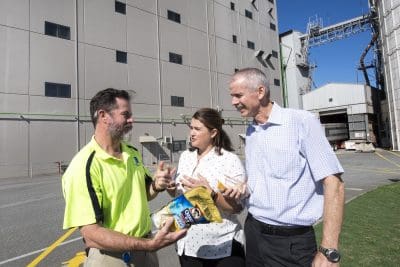 Department of Agriculture and Food (DAFWA) director Rob Loughman said the emerging middle classes in South East Asia, China and India were increasingly health conscious and that was driving changes to dietary patterns, resulting in increased demand for oats.

“The WA industry has a growing reputation in supply of food quality oat grain that can be processed into a range of convenient, healthy, flavour-adaptable products.  These products are becoming increasingly popular in our regional export markets,” he said.

WA has also responded to growth potential in oat forage demand from developing dairy and feedlot beef industries in East Asia, enabling Australian oaten hay exports to roughly double over the past 10 years.

Dr Loughman said this was a positive time for the WA oat industry, as both Australian and foreign companies make a range of investments to expand processing capacity in the oat milling sector, as well as the export hay sector.

“For example, local processing capacity for rolled oats is likely to double as new processing plants come on stream in the next few years, enabling more exports of both grain and value added product,” he said.

DAFWA researcher Georgie Troup said there was an opportunity for growers to gradually expand oat production in WA, including in medium-low rainfall areas not traditionally a focus for oat grain production.

In the 2016 oat agronomy trial program, conducted by the department and funded by the GRDC, the WA-adapted variety Bannister continued to perform well in the low rainfall areas.

“Bannister was one of the best performing varieties of 2016. It out-yielded other oat varieties, met the Oat1 quality standards and responded well to frost conditions,” Ms Troup said.

Mr Loughman will discuss future oat opportunities for the WA industry as part the 2017 Grains Research and Development Corporation’s Grains Research Update, Perth, on February 27 and 28.

More information is available from the Grain Industry Association of WA website giwa.org.au/2017researchupdates