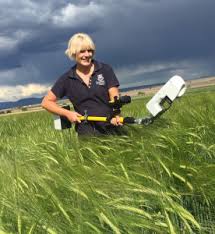 Hannah Robinson in the field; photo, University of Queensland

Presented at the Australian Barley Technical Symposium this week in Tasmania, where the topics included everything from the role of genetics in farming barley to commercial aspects of brewing beer and distilling whisky, the awards recognised excellence in research.

Ms Robinson is undertaking PhD work at the University of Queensland Centre for Plant Science in the field of selecting drought-adapted cultivars of barley.

Both awards provide the winner with a cash contribution and assistance to attend an international conference, and may include developing skills though visits to centres of excellence and liaison with a network of prominent scientists.

Dr Harris is a crop physiology research scientist with the New South Wales Department of Primary Industries at Wagga Wagga.

Matthew Aubert is a molecular biologist undertaking PhD studies at the University of Adelaide.

The title of the poster by Matthew Aubert was “molecular and genetic characterisation of early aleurone development in barley”.

The biennial Australian Barley Technical Symposium was held this week at Wrest Point, Tasmania. Around 180 delegates attended, a quarter of whom travelled from overseas.