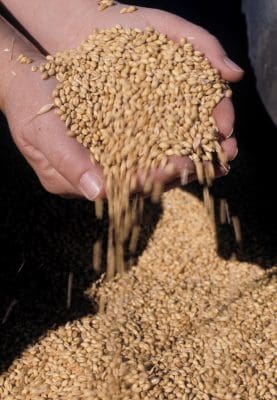 SPECTACULAR yields indicated for eastern Australian cereals harvest are jostling with the lateness of the harvest to stir a cocktail of what may be short-term price premiums for November deliveries.

The Brisbane track market has been “showing some strong numbers” at around $290/tonne for APH2 as container packers show their willingness to pay premiums for prompt shipments.

A Port of Brisbane communications spokesperson told Grain Central that while the focus in October and this month had been on chickpea container movements, new-season containerised wheat movements had commenced.

The nearby wheat premiums were the result of a late start to the western NSW and southern Queensland harvest.

“The spike in demand for wheat has come about because old-crop has been exhausted, and the harvest has been delayed by the slow ripening of a lot of crops on the Downs,” a trade source said.

“Growers are aware of that and, while a lot of them would traditionally hang on to their protein grades, they are capitalising on that buyer interest.”

At the opposite end of the price and quality scale, competition from sellers of feed barley and SFW1 wheat has livestock feeders and spot grain sellers dealing at around $180/t delivered Downs where fast truck-turnaround means “it might be easier for a grower to get more daily loads delivered on the Downs than to get B-doubles into Brisbane”.

An abundance of H2 wheat in south-east Queensland has seen its premium over APW fall from the usual $12/t or so to more like $8-$9/t in the past week.

“Big yields from a big area have seen spreads narrow over the past week.”

“The feed discount to APW has also reduced as the protein premium abates, and growers, traders and even consumers sell into what many believe is a falling market,” the trade source said.

However, the market is expected to soften as supply-side pressure builds in response to big yields for wheat and barley, and better-than-expected chickpea yields.

While frost and foul weather had affected harvest in several states, WA, SA and Victorian suppliers have benefited from strong nearby prices to fill the void in November supply caused by other states’ late harvest.

WA container packers have exported more than usual quantities of wheat this month.

November wheat container shipments were also switched into nearby South Australian slots, partly because of chickpea shipping pressure in Queensland.  In Victoria a $40/t price inverse between old and new crop wheat reflects tightness in nearby wheat supply in that state.

Lachstock Consulting manager Lachie Stevens told Grain Central: “there’s not a lot of wheat available in Victoria this month so, until we get into harvest, supply will stay tight.  There’s not a lot of fresh export business getting booked here.”

“Any further weather problem, particularly as we get into harvest, could result in a fine balance between lower-grade and H2-and-better protein wheats.”

“If harvest weather is fine, there’s a greater chance of Australia’s winter crop outcome getting bigger not smaller,” he said, “indicating growers would be likely to take advantage of premiums early”.