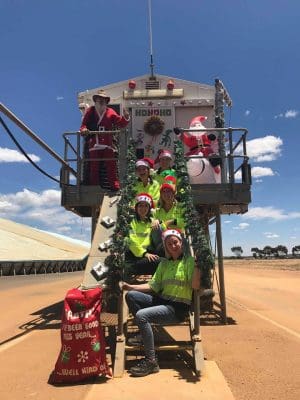 CBH’s Ravensthorpe team gets into the Christmas spirit.

This is the second upward revision for the 2017/18 crop, which CBH initially estimated in September at 9.5-10Mt.

“It’s fair to say that this year’s harvest has exceeded our expectations, particularly in the southern part of the state,” CBH general manager operations, David Capper, said.

In its latest harvest report, CBH said rain was again a feature of the week for many areas, and the company would be monitoring receivals for sprouting, and making falling number units available if needed.

Mr Capper said some while some sites across the CBH network were starting to wind down, many sites would remain busy up to and after Christmas.

“If you are still going, please get in touch with your local CBH site or the CBH website to find out opening times in the lead-up to and immediately after Christmas”.

The Albany zone received 630,000t over the past week to take total receivals for the year to 2.37Mt, above the 2.1Mt the zone had received to 14 December last year.

Rain last Monday which registered 1-60 millimetres stalled harvest, and while some growers were able to resume the next day, others, particularly in the south of the zone, had an enforced break of several days.

“While the full impact on quality will not be fully determined until harvest is back up and running, it’s expected there will be some downgrading of wheat,” Albany zone manager, Greg Thornton, said.

Falling numbers machines have already been deployed at some southern sites.

Some growers have finished harvest, or are close to it, in this zone which is estimated to be 75 per cent complete, and is expected to keep harvesting into the New Year.

Rain last Monday halted harvest in the Esperance zone, where most growers have finished harvest or have only a day or two to go.

CBH said a large amount of grain has been stored on farm, and is expected to be delivered to CBH sites before Christmas.

The zone has received 2.52Mt, including more than 1Mt at the Chadwick site alone.

“For the week, we received 361,000t, and hopefully most sites and growers will be well and truly wrapped up before Christmas,” Esperance zone manager, Mick Daw, said.

Harvest and deliveries in the Geraldton zone slowed considerably in the week to 14 December because of rain on what little crop remains to be harvested.

Carnamah, the Port of Geraldton, Mingenew, Mullewa and Northampton are the only sites in the zone which remain open.

The Kwinana zone took in 1Mt of grain in the week to 14 December to take its total for the harvest to 4.8Mt.

This was despite heavy falls of up to 40mm in the north and east of the zone.

In the past week, most deliveries were wheat, now that canola and barley deliveries have tailed off.

“Quality in the wheat has been very good so far, but with the recent rains, we will be keeping an eye out for sprouting in some areas,” Kwinana zone assistant manager, Allan Walker, said.

“Some growers in the north and east of the zone have finished their programs, and with good weather conditions expected over the next week, we will start to see a lot more finish up, with 95 per cent completed by Christmas.”