IT IS NOW the end of October, two months into the summer-crop planting season, and virtually no sorghum has been planted in northern New South Wales and southern Queensland. 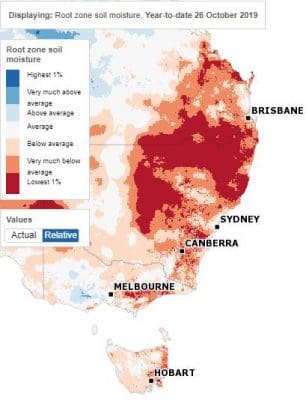 These cropping regions traditionally have a summer-dominant rainfall pattern.

However, that tradition has been seriously challenged in recent years, with the region in the grip of drought, the likes of which has never been previously experienced.

Basically, the tap turned off in late October 2016, and rainfall since then has been well below average across almost all districts.

This means that the soil-moisture profile in most summer-cropping regions of Australia remains at, or near, record low levels.

In addition, water storages that usually supply irrigation water to the regions are extremely low, and zero water allocations in most river systems reflect the dire situation facing the irrigation industry in the Murray-Darling Basin this summer.

Much of this year’s winter crop in northern NSW and southern Queensland was not planted due to the lack of soil moisture.

Concern is now mounting that the same scenario may play out for this season’s sorghum crop.

Planting of sorghum in these regions normally starts in early spring, with the primary requirements being an adequate soil-moisture profile, the soil temperature at, or above, 16°C and rising, and the risk of frost has passed.

The soil-temperature and frost thresholds are well behind us, but most growers require a minimum of 100-150  millimetres of slow, soaking rain, preferably over a couple of falls, before they would consider planting.

However, planting sorghum in November is traditionally shunned in northern NSW and southern Queensland. This is a strategy to reduce production risk by avoiding flowering in the peak of summer.

As a result, there are typically two distinct planting windows. There is an early-planting window, which opens as soon as conditions are suitable but shuts at the end of October. Then there is the late-planting window that goes from early December through to early or mid-January, depending on geographic location.

With the traditional early-planting window all but closed, it will be fascinating to see how growers react if they receive enough rainfall to plant before the end of November.

Will they plant immediately or stick to a proven formula and delay until early December?

In the past two springs, many growers planted sorghum on a less-than-ideal soil-moisture profile.

They were banking on average to above-average summer rains to get the crop through to harvest.

Unfortunately, the rains did not eventuate, and the crops suffered accordingly.

Growers cannot afford a third summer-crop failure, and there will be a distinct reluctance to plant unless the soil moisture profile is full, or almost full.

Nevertheless, it is definitely not too late to get a significant sorghum crop in the ground. And there is always Central Queensland to help save the day. Harvest of an above-average winter crop is now winding down in that region and the traditional sorghum planting window of January through to mid-February is still two months away.

National production of as much as 1.5 million tonnes (Mt) is still possible, but likelihood is falling with each dry day.

When the rains do arrive, growers will undoubtedly react quickly as long as it is not too late. If it is, they will focus on retaining the soil moisture for a big winter-crop plant in the autumn.

Domestic sorghum demand generally fluctuates between 850,000t and 1.2Mt per annum, depending on the price of sorghum relative to alternative feedgrains such as wheat and barley.

Sorghum is used as a source of starch in the ethanol industry on the Darling Downs. While the plant can use barley, it is not the preferred feedstock and as its annual sorghum demand of around 180-200,000t is relatively inelastic.

The same can be said for 400,000t of core demand from the poultry sector in NSW and Queensland, although that has been decreasing in recent years.

At the moment, most in the trade would still have sorghum demand penciled in for 800,000t to 1Mt.

If sufficient rain fails to arrive in the next two months to achieve production of that magnitude, some serious demand rationing will ensue.

And white grains from Victoria, South Australia and Western Australia will be called upon to fill the void.