A crop of Mustang wheat is harvested at Emerald in central Queensland. Photo: Renee Anderson

An average of selected forecasts now puts mainland Australia’s wheat crop at 28.2 million tonnes (Mt) and barley at 10.4Mt, up from 26.Mt and 10Mt respectively seen in July.

Influencing the numbers are deteriorating prospects in WA, where many crops are running out of time to get rain that will boost yields, juxtaposed against a booming outlook for south-eastern Australia.

Star of the show is NSW, which looks set to produce its biggest ever wheat crop to strip the title WA normally takes as Australia’s biggest wheat producer.

SA’s southern districts and Victoria are on track for average to above-average yields.

Grain Industry Association of WA (GIWA) September wheat and barley estimates fell 4.9 per cent and 1.6pc respectively from its August numbers, and further cuts are expected in October figures due out this week. 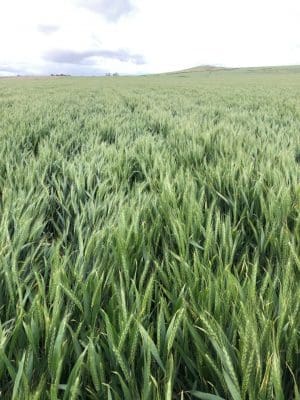 This crop of wheat in south-west Victoria is forecast to yield 9.1t per hectare. Photo: Grain Industry Association of Victoria

Lachstock said the recent trend of excellent conditions has continued for NSW, Victoria and SA, but WA was a different story.

“WA continues to go backwards without any meaningful rain in the last month,” Lachstock’s report said.

“With temperatures heating up and a lack of sub-soil moisture, this has meant WA yield prospects have deteriorated significantly and are on an ongoing decline.”

Lachstock’s monthly wheat estimates were revised late last month, with a 1.1Mt cut to WA outweighing a 980,000t improvement in NSW to trim its national number.

“WA continues to suffer from a lack of rainfall and has further downside should rain not come in the coming month.”

“Conditions were better early in the year than last year, so we don’t expect a fall to last years levels, but a crop around 7Mt cannot be ruled out.”

In its monthly figures released today, IKON Commodities has gone big on wheat based on what it describes as “very favourable conditions” across eastern Australia, particularly NSW, which it said could produce a record wheat crop of 12.5Mt or more.

IKON’s national barley number at 10.6Mt is the biggest of those released in recent weeks, but sits well below the ABARES number released early last month, before a hard start to spring pummelled WA prospects.

The ACF numbers factored in a 9pc drop on WA wheat versus lifts of 8pc and 4pc respectively for Victoria and NSW.

ACF lifted its barley NSW production estimate by 14pc, Victoria by 4pc and SA by 5pc, but cut WA by 5pc.

In its World Agricultural Supply and Demand Estimates released on Friday, USDA left its estimate for Australian wheat production unchanged from the September figure at 28.5Mt, and exports at 19Mt.