Eastern harvest receivals roll in ahead of more rain

EASTERN states bulk handler GrainCorp has taken in 2.613 million tonnes (Mt) of grain in the harvest to 27 November following an intake over the week of 1.234Mt.

And receivals for South Australia’s Viterra have topped 2.2Mt following the largest week of the season so far. 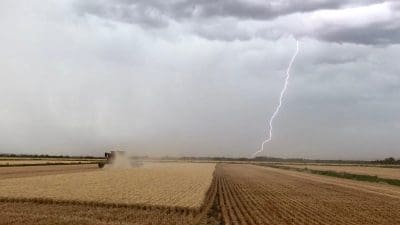 A storm moves in as a harvester races to bring the crop in at Yenda in southwest NSW. (Photo: Chris Gribble)

In Queensland, GrainCorp took in 6000t over the past week to take the total to 540,000t as the state’s harvest nears completion.

These totals represent new-crop tonnes received at GrainCorp sites, and include some deliveries received prior to 30 September.

IMAG agronomist, Cameron Corke, said growers were concentrating on getting their wheat off before the rain at Forbes in central NSW.

“Wet weather has stopped us at the moment, and most people won’t get going until tomorrow,” Mr Corke said.

“The barley is all done, canola that’s being direct-headed has still got late green pods, and the wheat’s where the return is because the protein’s been good and so have the yields.”

Mr Corke has estimated the average yield of dryland wheat in the wider Forbes district at 3.5 tonnes per hectare.

“It’s nearly all been H2 or Prime Hard, and people are reasonably surprised and reasonably happy with that after the lack of rain in the growing season and then the frosts.”

He said dryland yields have gotten up to 6t/ha on country which flooded last year, and irrigated cereal crops have nudged 7t/ha with as little as one watering.

Mr Corke said dryland barley has been yielding 3-3.5t/ha, and a considerable amount of it has made malting.

Most growers in the Forbes district are more than halfway through their harvest.

“They’re talking big rain on Saturday, and people with 30 or 40 per cent of their crop left to harvest are going to be chasing the wheat.”

Terra Ag Services principal and agronomist, Mark Zanatta, Griffith, said around 80-90pc of the Riverina’s dryland crops in southwest NSW had been harvested, and around 60pc of the barley harvested to date had made malting grades.

“Wheat’s been making Prime Hard to ASW, depending on soils and paddock history, but any rain on those soft wheats from here on in won’t be good because biscuit wheats are susceptible to weather damage.”

Mr Zanatta said the harvest of irrigated cereals was only around 10pc completed.

The better dryland yields for wheat have averaged 1.75t/ha, while the poorer crops have yielded less than half that, and barley had generally yielded a little ahead of wheat.

Irrigated wheat has been yielding 7-8t/ha as harvesters work around storm rain which delivered close to 50 millimetres last night.

“The headers are going flat stick.”

In South Australia, more than 776,000t of grain was received into Viterra sites last week, bringing total receivals to 2.2Mt.

In what was the largest week of the harvest so far in SA, the largest receival day of the season came on Tuesday 21 November with 237,000t received into Viterra sites.

But significant rain from Wednesday again prevented harvest from getting into full swing.

In SA’s western region sites, 174,715t have been received over the past week with rain halting harvest for many growers in the region.

The shipping season got underway at Port Lincoln last week with the state’s third-largest grain vessel ever to leave
SA’s shores. About 74,000 tonnes of new and old season wheat and barley was loaded onto the Adriana Rose, headed
to the Middle East.

The central region of SA has passed the 1Mt mark for total season receivals after 362,782t were delivered to sites last week.

Despite rain also impacting SA’s eastern region, more than half of the region’s total was taken over the past week.

Shipping commenced at the Adelaide terminals last week with two wheat vessels loaded. About 40,000t of wheat was exported from Outer Harbor and 32,000t from Inner Harbour.