THE replacement of fossil fuels with hydrogen could cut the energy bill for nitrogen-fertiliser production by 70 per cent, and have a flow-on effect to growers which could boost grain profits, according to GRDC managing director Steve Jefferies. 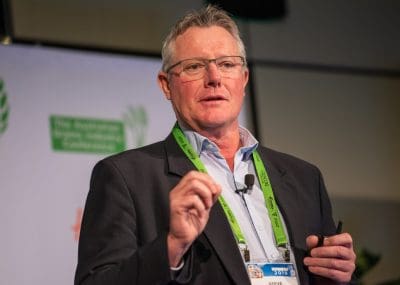 Addressing the Australian Grains Industry Conference (AGIC) session entitled Embracing change: Adapting to an ever-evolving environment in Melbourne last week, Dr Jefferies said GRDC was looking at how a process tied to the hydrogen-power industry could benefit agriculture by using hydrogen to make ammonia and cut the cost of nitrogen for farmers.

“Nitrogen from time to time can be the highest input cost for growers, and it is now the largest greenhouse gas emission part of the whole grain industry,” Dr Jefferies said.

“The manufacture of nitrogen fertiliser requires huge amounts of energy.”

Dr Jefferies said use of applied nitrogen needed to stack up for the grower, for the environment, and for the grain industry’s consumers.

“Our consumers are also very concerned about how sustainably their food is produced.

“For us, more of the same is not going to be good enough.

“We will invest in driving profitability that is sustainable.

GRDC has partnered with CSIRO, the Australian Renewable Energy Agency (ARENA) and Orica researching the manufacture of fertiliser using hydrogen energy, which Dr Jefferies said could translate to a transformation in profitability for grain growers.

“There’s even potential we could be doing this on-farm.

“This can transform how we use nitrogen.

“It can transform the value proposition of wheat.”

Nitrogen is the key input for building wheat protein and yield, and limited plant-available nitrogen is seen as a productivity inhibitor for the grains industry.

Outside AGIC sessions, delegates were remarking on low protein levels in some batches of last year’s Western Australian wheat which had been shipped to eastern states to fill the drought shortfall.

Dr Jefferies flagged the incidence of low wheat proteins in his address saying around 3.7 million tonnes (Mt) of WA’s most recent wheat crop, estimated by ABARES at 10.15Mt, came in at less than 9.5pc protein.

Dr Stephens said the use of nitrogen fertiliser had not increased at the same rate in variable-rainfall areas as it had in areas of more reliable rainfall.

In his address he said yield variability was higher in WA’s eastern wheatbelt, and much lower in its western areas, where rainfall was more reliable.

He said from about 2000-2015, commercial nitrogen fertiliser-application data showed that nitrogen application reduced in WA’s north-east wheatbelt, but increased dramatically in the more stable high-rainfall areas.

“So the farmers are being more risk-averse in the more variable regions, and increasing their productivity in the western regions with more nitrogen.”

While 2019 Farrer Medal winner Tim Reeves spoke at AGIC last week in favour of biologically fixed rather than applied nitrogen, his sustainability-focused oration found common ground with Dr Jefferies’ address in saying a changing climate was threatening productivity in the grains sector.

“It’s that background and that environment amongst other things that has driven the GRDC to completely turn itself upside down and redesign itself for the next 20 years, getting ready for that changing environment.

“We have to go bigger, harder, faster if we are going to get ahead of that changing environment.

“To get practice-change at grower level, it must be first and foremost driven by profit.”

Dr Jefferies said research and development in Australia had contributed enormously to the growth of the Australian grains industry.

“Over the past two decades, the value of gross production of the Australian grains industry has grown from about $4 billion per annum to about $16bn.

He spoke about immense advances in water-use efficiency (WUE), new tools to combat disease and myriad ways to improve productivity.

He said the success of the 2018 crop during an exceptionally dry season was testament to that work, creating profitable cropping where in a previously equivalent year there was no crop.

“We are working in a highly variable, high risk and changing environment.

“Productivity in 90pc of Australia has actually declined by the order of five to nearly 20pc.

“Thank goodness for the offset from developments in water-use efficiency, so we really haven’t seen the impact going through our bins and silos.”

Dr Stephens said crop water-use efficiency was steadily rising, but this was being affected by increased climate variability as well as a reduction in nitrogen-fertiliser application, especially in eastern Australia.

“I really think we need to be closely monitoring these climate trends and productivity changes and have an industry good function that monitors this so we can assist supply-chain planning and investment of research and development spatially across the wheatbelt.”