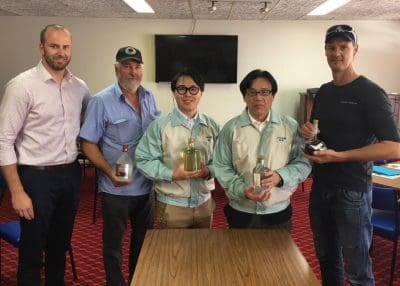 Sanwa is Japan’s largest distiller of the spirit, Shochu.

Glencore Agriculture’s barley trader, Jonathon Evans, said it had been sourcing South Australian barley as its main ingredient for the past 20 years.

“This will be a unique opportunity for growers to hear directly from an international end-user who has been a long-time buyer of South Australian barley,” Mr Evans said.

“Sanwa will explain why high standards of quality are so important and discuss with growers the barley varieties in demand.”

Mr Evans said end-users valued grain from South Australia for the clean, green environment in which it was produced, and the world-class facilities through which Viterra handled it.

“In a global marketplace, South Australia is competing with all other states in Australia and countries around the world to sell grain,” he said.

“End-users are increasingly looking for high standards of quality control and food safety management delivered through an efficient and reliable supply chain.

“Having these elements in place through Viterra helps us encourage end-users to source their grain from South Australia to the benefit of South Australian growers.”

The meetings are giving Sanwa representatives the chance to speak directly with more than 120 growers, and offer tastings of their products.

As well as attending meetings at Cleve and Cummins on the Eyre Peninsula, Sevenhill in the Clare Valley, and Strathalbyn in the Lower Murray, the Sanwa delegation is visiting Viterra’s Adelaide port terminals, an up-country site and a laboratory.