AUSTRALIA’S first farmer and private-equity partnership port will be built at Lucky Bay on South Australia’s Eyre Peninsula (EP) to provide a grain storage and export option to the bulk handling and loading facilities operated in SA by Glencore’s Viterra. 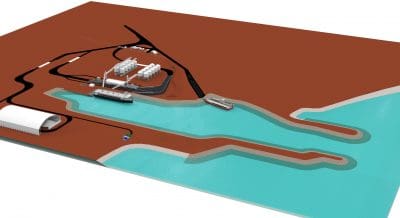 It will operate under the banner of T-Ports, which plans to have the facility operating in time for the 2018 winter-crop harvest, and has development of a second port under investigation on the neighbouring Yorke Peninsula.

The Lucky Bay Port Facility will centre on a shallow harbour located on the east coast of the Upper Eyre Peninsula.

T-Ports said a shallow-draft transhipment vessel with a 3500-tonne capacity, currently under construction in China, will be used to load Panamax vessels within the usual five-day industry standard.

T-Ports CEO, Kieran Carvill, said the directive from growers had been to increase supply-chain efficiency, and this could be achieved through Lucky Bay as a low-cost and multi-commodity port close to the product origin.

“This investment innovates upon the traditional port model and almost monopolistic grain supply chain in South Australia through proven transhipping technology that has been utilised in other industries for the past 20 years,” Mr Carvill said.

“The lower build cost and smaller environmental footprint compared with traditional export port facilities in South Australia has made the financial feasibility of the investment easier to attain with a lower throughput requirement from growers.”

T-Ports’ said it will have a grain storage capacity at Lucky Bay of 430,000t, and up-country storage at Lock will hold an additional 150,000t.

After an expression of interest phase last year, 120 EP grain growers indicated their support for the project with 377,000t of estimated throughput.

These growers will acquire equity in the port for ongoing throughput over the next seven years.

T-Ports said, depending on their proximity to the new port, growers were expected to save $5-$20/t in transporting grain from farm to Lucky Bay compared with the cost of transporting it to other South Australian ports.

The company said the proposed importing of fertiliser could generate further freight savings of $25-$40/t for growers currently carting product from Port Lincoln or Port Adelaide.

Lock grain grower and T-Ports board member, Andrew Polkinghorne, said the Lucky Bay project had been the breakthrough that many EP growers were waiting for in supply-chain competition.

“The benefits of this project will flow through to farming families, and their local communities, as they secure equity in T-Ports and, as a result, a share of the profits of storing and shipping their grain.”

Mr Polkinghorne said the Lucky Bay terminal would initially focus on storing and shipping wheat and barley, with canola a possibility for future seasons.

“We aren’t going to be marketing the grain ourselves. What we deliver will be open to the rest of the market to trade.”

“South Australia is in need of new export infrastructure in order to improve agricultural economics and allow development of its mining assets in an increasingly competitive world environment,” T-Ports chairman, Rob Chapman, said.

“While this port development is based on agricultural product, it can readily expand to allow exports of local minerals and T-Ports will be pursuing opportunities to further diversify and grow the commodity base.”

T-Ports said EP growers who did not respond during the EOI period can still be involved.

A retail fund will be set-up before June 2018 to give growers the opportunity to invest in the project.

Until now, the Lucky Bay harbour has been used primarily by the SeaSA passenger and vehicle ferry which crosses Spencer Gulf.

SeaSA has suspended its Wallaroo-Lucky Bay service while construction of T-Ports’ shore-side facilities is under way, and the ferry is to resume operation later this year.