SOUTH Australian growers have delivered 3.05 million tonnes (Mt) of grain to bulk handler, Viterra, in the harvest to Monday following a week when 773,570t were received at sites across the state ahead of rain which started on Thursday in many areas. 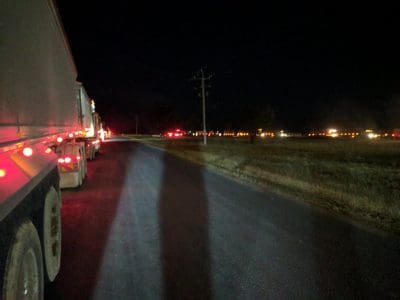 The line-up at GrainCorp’s Milvale site west of Young in NSW ahead of last week’s rain: Photo: Anda Reilly

Eastern states bulk handler, GrainCorp, has taken in 872,500t of grain in the week to yesterday to lift the harvest total to 3.49Mt, reflecting a hectic period for operations staff as harvesters worked mammoth hours to beat the rain.

This has brought the total received in eastern states by the two major bulk handlers to 6.54Mt, not far behind the 7.11Mt received in the Western Australian harvest to 30 November.

In Queensland, where the winter-crop harvest is all but over, 5500t were delivered to take its total to 545,500t.

GrainCorp said rain on Thursday and Friday forced the temporary closure of most of its receival sites.

Viterra has announced it will be opening additional wheat segregations, in particular AGP1 and SFW1.

The company has said these segregations will allow growers to potentially capture higher value for their wheat.

Feed barley segregations are already available and additional segregation for pulses will also be opened if required.

Viterra said it would continue to work closely with growers to ensure it provides segregations and other services as needed.

Viterra has advised moisture testing will be available at a number of smaller sites, in addition to major sites, for growers to check crop progress, an opening hours will again be extended as much as possible once growers are ready to deliver.

Viterra said two of the season’s largest receival days came on Tuesday and Wednesday last week, when 496,000t in total came into the South Australia system as Viterra staff at many sites worked extended hours ahead of the rain.

The company said lentil and bean deliveries on Eyre Peninsula increased significantly last week now that the harvest of peas and barley was largely complete.

The week to Monday saw the central region receive 401,172t of grain, its largest week of the season so far, while the Port of Wallaroo on Yorke Peninsula loaded its first vessel of the season, 27,000t of wheat.

In the eastern region, which includes Victorian sites and Adelaide’s Inner Harbour, 173,023t of grain was delivered in the past week to bring the harvest total to 621,618t.

Daily receival records were broken last week at Strathalbyn and Monarto South, between Adelaide and the Murray River, at Ardrossan on the Yorke Peninsula, and at Bowmans on the western edge of the Mid North.

Viterra also reports its canola receival record was broken on 28 November, when 26,246t was delivered to sites across the network.

Viterra figures include grain received into its network since 25 September.