SOUTH Australia’s Labor Government has pledged $150 million to establish a South Australian Ports Authority (SAPA) to oversee port development, including a new deepwater facility on Spencer Gulf, if re-elected in the state election on 17 March. 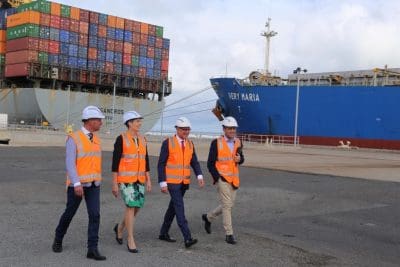 Labor has said the multi-user port would create 100 ongoing jobs, boosting exports and employment opportunities in mining, agriculture and associated industries in regions around Spencer Gulf.

The gulf separates two of South Australia’s key grain-exporting areas, the Eyre and Yorke peninsulas, which jointly have four grain ports, of which only Port Lincoln offers deepwater access.

This limits the size of grain ships able to berth at other ports.

Free Eyre is a grower collective which has been looking into the development of a deepwater port to service Eyre Peninsula growers, and has welcomed the Labor Government’s announcement.

“Free Eyre understands there is a need for another deepwater port on the Eyre Peninsula, and it will create efficiencies in the grain industry,” Free Eyre chairman, John Crosby, said.

“Port Lincoln is the main port for the Eyre Peninsula, but it’s not located where most of the grain is grown.

“We welcome any efforts by government at any level to recognise the Eyre Peninsula’s need for another deepwater port.”

In making the announcement on the weekend, South Australian Premier, Jay Weatherill, said the equity injection of $150m would allow SAPA to borrow more than $500m to develop the new port, which would be capable of hosting cape-sized vessels.

Mr Weatherill said SAPA would be established as a public non-financial corporation, and would seek private-sector involvement in planning projects and identifying appropriate locations for ports to be developed.

“It will also drive more competition to benefit our agriculture industry and manufacturers in sectors such as defense that are seeking to access export markets cost-effectively.”

In addition to overseeing the funding and development of a new port, SAPA would be tasked with investigating opportunities to help fast-track private-sector port proposals across the state.

“This State Labor Government has failed to deliver a new port in South Australia in the 16 years it has been in power,” Mr Pisoni said.

“A Liberal Government will better work with the private sector to deliver productive infrastructure, including a new port.”