WHEAT futures prices hiked 3 per cent on Monday night, a little over A$6/t in nominal Australian terms, of itself not a major change but it may signify a step on the way to wheat prices building a platform for markets supporting prices not seen for several years.

“This rise probably pushed the market up to a level of resistance that, if it were to break through in the near term, could add another US20 cents a bushel,” Clare-based consultant Malcolm Bartholomaeus said.

“The futures price is returning towards levels that we peeled off from in August last year,

“It is reasonably constructive to underlying support in the market; then it’s a matter of whether there’s enough new news around to push it to the next level.

Headwinds, though, could arise from currency if the US dollar were to strengthen.

Currency, a weakening US dollar, had been a major driver for the initial gains that started with investment funds short covering, followed by risk premiums from the weather which further drove the futures.

While northern hemisphere wheat crops are in a tricky space just now, investor funds have sold themselves into short positions and are feeling increasingly uncomfortable about remaining short in an uncertain market.

Recent buying was attributed to funds dealing with these short positions which, once covered, will still be dealing with weather risks.

“The dryness in the US is a risk.  There is good deep subsoil moisture apparently, though crops would have to get their roots down into it after starting the growing season with not enough moisture behind them.”

“The dryness also extends to areas of Canada, where there’s limited snow cover.”

The risk to funds investors is whether they can pick the turning point in sentiment of massive global stocks which have kept down in the past two years, to a new situation of smaller stocks and higher prices.

Mr Bartholomaeus said a wheat value of 500 cents per bushel was “a bit of a line in the sand”.

“When we talk about upside, we might be targeting something like 500c/bu, which in the big picture is not a particularly high price; it just gets us back to base level. 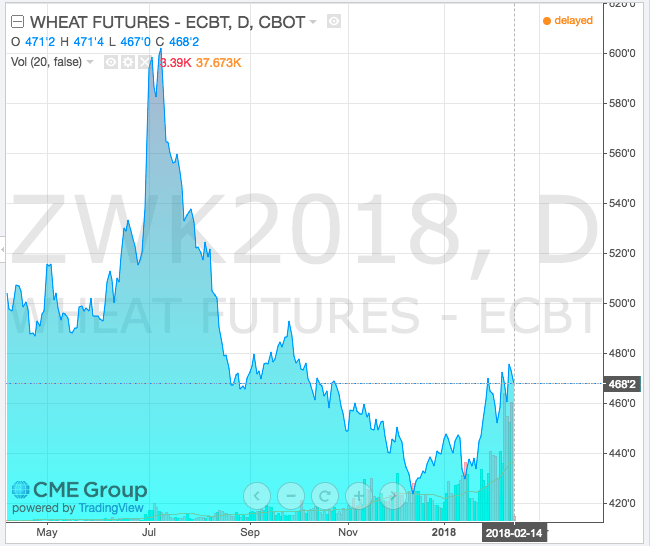 “This market isn’t one of these explosive situations where prices would go extremely high, but does have the potential to put us back to a more reasonable price range.

“The Port Adelaide zone bid prices are as high as they were in October, so the best that we have seen for this physical harvest.”

Tightness in the balance sheet is one cause of a rising basis, or premium over US wheat futures.

In South Australia for example, the basis has been a strong at A$35-$40/t, driven by demand from the east coast domestic feed and milling sectors, which bumped prices when the markets realised grain supply was tighter than expected after the record 2016 crop.

“The east coast basis is likely to stay strong until supplies of feed grains are more comfortable in NSW/Qld. That might take a while.”

Basis is an issue on Western Australia too, according to Geraldton-based consultant, Ten Tigers’ Chris Tonkin.

Mr Tonkin said the existence of the strong basis had helped growers with their selling decisions in fluid markets, particularly in evaluating pricing differentials, or grade spreads.

“We are seeing sporadic reasonable premiums in some grades, so the strong basis might suggest the grower not be too optimistic but jump on the price while it’s available.”

Mr Bartholomaeus said in eastern states, basis was likely to stay strong until harvest 2018 unless it were to cause exports to shut down too sharply.

However, the effect of a high APW basis was that grade spreads as premiums to the protein wheats were somewhat trimmed.

“Spreads to the higher protein wheats have been firm, but not excessive because of the strong basis levels for APW.   NSW spreads in particular are low because of the prices being paid into domestic feed markets,” he said.