REPORTS of Septoria tritici blotch (STB) in some parts of the low rainfall zone (LRZ) which received good opening and follow-up rains have prompted researchers to remind growers of the importance of correctly identifying the disease and enacting an appropriate fungicide strategy if required.

STB is a stubble-borne disease of wheat caused by the pathogen Zymoseptoria tritici.

In extreme cases in these areas, yield losses of up to 50 per cent have been recorded. 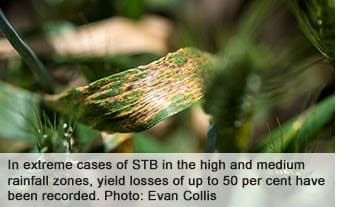 “Early infections of STB in crops up to growth stage 31 or the start of stem elongation will occur on the lowest leaves of the crop,” he said.

“If STB is present, growers will be able to observe pycnidia, which are small black dots within the necrotic areas of the lesions.

“The pycnidia are what makes STB distinctive from other diseases such as yellow leaf spot.”

Dr Milgate said a complicating factor of STB when compared to yellow leaf spot was the disease’s long latent phase – the time from when a spore lands on the leaf until infection could be observed – which could be between three and five weeks.

According to the GRDC’s “Managing STB in wheat” fact sheet, the Zymoseptoria tritici fungus can survive in crop stubble and plant debris for more than one season, depending on the rate of stubble breakdown. 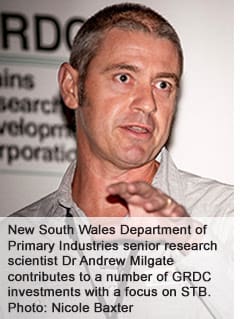 In autumn/winter, the fungus develops sexual fruiting bodies that appear as black, pinhead-sized structures which sit at or just below the surface of the stubble and leaf blades. Primary infection is mostly initiated by sexual spores (ascospores) produced in the fruiting bodies.

Ascospores become airborne and can infect young plants in early-sown crops. The airborne nature of the spores means they can infect surrounding crops and regions. Secondary spread within the crop occurs from rain splash by asexual fungal spores, conidia, produced on infected leaves.

Temperatures of 15°C to 20°C with rain followed by at least six hours of leaf wetness or dew are optimal for infection.

“This means if there are high levels of STB inoculum in the MRZ or HRZ, there is the opportunity for spore showers with rainfall events during autumn, meaning the disease could move into crops in the LRZ.

“It would be fair to say there could have been low levels of STB infection in LRZ crops over the past few seasons as a result of these spore showers, but conditions weren’t favourable enough for the disease to develop further.

“A good start to the year rainfall-wise can provide the opportunity for the disease to develop.”

Dr Milgate said there was a strong relationship between risk of STB infection and time of sowing.

“That’s purely because the Zymoseptoria tritici fungus is primed to release spores in conditions which are ideal for early sowing,” he said. 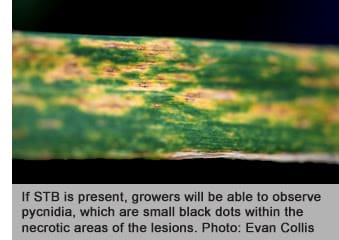 “If there is an early break then there will be spore showers.

“In a local environment, if back-to-back rotations of susceptible varieties are grown then the in-paddock risk would be much higher.”

Popular varieties such as Sceptre are rated susceptible to STB. Should STB infection be correctly identified in crops, Dr Milgate said growers and advisers should address three questions before opting for a fungicide:

“If the answer to all three questions is ‘yes’, then a fungicide strategy is encouraged,” Dr Milgate said.

Research conducted as part of GRDC investments has indicated that, under high disease pressure, a fungicide spray at GS31 will provide protection to the plant against STB during stem elongation.

Follow-up sprays will be important, depending on disease pressure and weather conditions.

“Growers should be prepared to continually monitor the progression of STB after the first fungicide application because treating it is different to treating a rust.

“The fungus recovers after the fungicide wears off on the green leaf area and spores are reproduced from lesions for infection to start again.

“We see that in our trials where an early spray will check the disease, but once the fungicide wears off the disease will start progressing again under conducive conditions.”

In low rainfall environments where expensive products might not be warranted, most triazole fungicides should provide adequate protection.

“However, if the season progresses with continual above average rainfall and STB is still a concern, it is recommended to rotate fungicides with alternative modes of action, such as a succinate dehydrogenase inhibitor (SDHI) in a mixture with a triazole,” he said.

If STB is present, planting the following crop to another susceptible wheat variety is strongly discouraged.

An integrated disease management approach is recommended to appropriately manage STB. This includes:

Growers and advisers who are not confident in correctly identifying STB can send plant samples to Dr Milgate in NSW, Dr Grant Hollaway at Agriculture Victoria or Dr Hugh Wallwork at the South Australian Research and Development Institute.