TRADERS and end-users are waiting for wheat’s premium over sorghum to drop before extending near-term coverage as prospects for a summer-crop improve and quality prospects for the point-of-harvest winter crop deteriorate with every rain event. 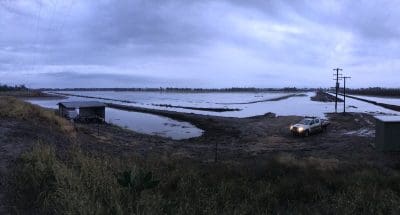 In the past fortnight, most Queensland and northern NSW cropping areas have had 30-150 millimetres of rain, and AgVantage Narrabri-based broker, Josh Brown, said its impact on nearby feedgrain values has been limited so far.

Further falls forecast into the weekend could change that.

“There would be some uneasiness about what we’ll get out of the sky tomorrow,” Mr Brown said.

“While wheat proteins have been good, screenings was a problem; now we’re looking at some weather damage too,” Mr Brown said.

Limiting this impact will be the fact that the bulk of northern NSW wheat this harvest will come from slopes areas, where many crops have yet to ripen and can expect some yield benefit from late rains.

Mr Brown said some demand for current-crop as well as new-crop wheat existed in northern NSW and in southern Queensland, including the Darling Downs.

That compared with Prime Hard wheat for prompt delivery into Narrabri at $340, and up to $350 for new-crop.

Trade sources have said values for feedgrain started to kick when dry weather concerns in Queensland and NSW took hold of the market.

“The gap between Prime Hard and feed wheat has been narrowing since late August because feed values have risen.”

A comparison between prompt and October 2016 values tell the story: high-protein wheat delivered Narrabri is currently trading at around $290, compared with Prime Hard 12 months ago at $190, and feed wheat trading today at $260 is $105 above values last October.

Mr Brown said the rain has helped to shore up supply prospects for new-crop sorghum which, weather permitting, will be planted in the next few weeks in time to hit the market in March.

“Downs demand for sorghum is quite soft compared to where it was three weeks ago for chooks and pigs.”

“Now feed wheat, barley and chickpeas are the words on everyone’s lips; the next few weeks will be telling.”

United Petroleum’s Dalby Bio-refinery is a significant user of grain for ethanol production, and Mr Carsburg said the plant can easily switch between feedstocks of sorghum, wheat and barley, depending on whatever was the best buying.

“We’re pretty comfortable with our coverage, and we won’t be using wheat at this stage because it’s too dear.”

He said the rain would impact quality of wheat crops on the point of harvest, but later crops which were still filling would pick up some tonnage from October rains.

“Now we know there’s sorghum coming in 2018, that’s good for us, and it’s good for the farmers to know they can get a crop in the ground.”

The NSW-Queensland border areas have had up to 140mm of rain in the past fortnight, and most growers were just getting started before wet weather stopped the headers.

Most of Central Queensland’s wheat was harvested before the rain hit, and in the state’s south, wheat crops with better yield prospects on the Inner Darling Downs are still a few weeks away from harvest.

The rain has halted harvest on the Maranoa and Western Downs in Queensland, and on the north-west plains of NSW, but is setting up all regions for a sizeable sorghum plant.

“There are a fair few people going on canola, barley and wheat; the barley looks good, and the canola is OK, if a bit low on oil,” Mr Brown said.