South Australian planting fires up ahead of rain

MANY growers in the South Australian grainbelt are dry sowing as much of their winter crop as possible ahead of 10-20 millimetres of rain forecast to fall over the next 48 hours. 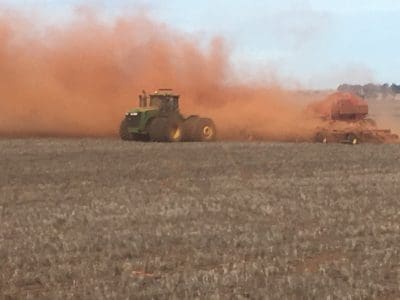 Sowing in South Australia ahead of forecast rain at Buckleboo on the Upper Eyre Peninsula.

“If we have moisture, we’ll start sowing on Anzac Day, and people are trying to get as much grain in the ground now as they can and hoping for at least 10mm from this system,” Mr Modra said.

Some early cereal crops have germinated, and will benefit from the forecast rain, which is likely to be enough for most growers to complete their barley, canola and wheat seeding programs.

“Canola is sensitive to moisture conditions, and if it gets 10mm it should be fine.”

Lentils will finish up the EP seeding program, and may need another rain to get established if falls in the next day or two come in at the low end of expectations.

On the Yorke Peninsula (YP), forecasters are predicting an 80-per-cent chance of 10-20mm over the next day or two, and YP Ag agronomist Daniel Hillebrand, Kadina, has estimated a maximum 5pc of the region’s crop has been planted.

“If we get this rain, that figure might go up to one third,” Mr Hillebrand said.

“There a certainly a few people starting to crank up around the place, especially the bigger farmers who have to get a fair bit of crop in.

“A lot are trying to get some crop in the ground before the rain event, and 20mm of rain will get a lot more wheels turning.”

He said lentils where YP’s major break crop, and even with prices at a low in recent years, were still a more attractive option than canola.

“Lentils are cheaper to grow, and the give a better return than canola, and  at $500/t, they will have an equivalent gross margin to wheat, which is double the yield.

At Clare in the Mid North, Ground Up Agronomy’s Michelle Bammann said forecasts were predicting up to 20mm over Thursday or Friday.

“Most are putting in fodder crops, canola and some legumes now, and we were lucky enough to get 5-20mm last month, which brought up quite a few of those early sown crops.”

That includes canola and vetch for sheep fodder, and Ms Bammann said barley was making a comeback in rotations this year to supplement wheat, export hay and canola area.

She said rainfall for 2018 to date had Clare tracking one of its driest years on record, and areas to the east including the Murray/Mallee were also desperately dry.