DOMESTIC feed-sector demand for wheat and barley now growing in Victoria and southern NSW has strengthened in the past week as warm days, a lack of rain and yet more frosts batter prospects for struggling crops in southern Queensland and central and northern NSW. 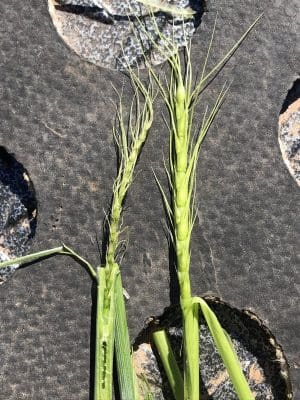 Two heads of Beckom wheat from the same farm at Mirrool on the outer southwest slopes of NSW. The example at left shows severe frost damage. Image: Jamie Pursehouse

Crop conditions on the outer slopes and plains of southern NSW are also deteriorating.

Traders said harvest pressure was becoming increasingly unlikely to impact on the price of grain from Victoria and those parts of southern NSW where crops were generally in good shape.

“If I was trading and I saw the bid in Victoria falling during harvest so it was good value relative to South Australia and Western Australia, I would be happy to own it.”

Mr Hume said the impact on price and availability caused by the northern feed grain vacuum could not be overestimated, and southern end-users should not be lulled into a false sense of security about 2017/18 feed grain supply by the health of Victoria’s crop.

“I’d tell Victorian consumers to look beyond their own back yard.”

Mr Hume said the size of Australia’s 2016 harvest saw sell-side pressure push the ASW price down by $30 per tonne.

“Some people got caught up in the emotion of it then and made wrong decisions. They forgot that when it is discounted like that, it is the cheapest wheat in the world, and it is already preferred by most consumers on a relative quality basis to Russian.”

Beef feedlots, predominantly located in northern NSW and southern Queensland, are Australia’s major users of feed barley, and can expect to source minimal tonnages from their own regions due to reduced plantings and failed crops.

Trade sources have said barley therefore had the potential to trade at a premium over APW wheat this year.

“This could be the year in which we see barley trade over APW; October-November-December is fairly bullish,” one trader said.

He said export demand for new-crop barley was also significant.

“There was an expectation that the northern hemisphere harvest was going to be cheaper and see us out of the market, but it only lasted a very short amount of time.”

“I think there will be opportunities to sell into that market that weren’t there last year for sure,” Mr Moloney said.

The flipside is that crops in parts of Victoria including the Wimmera are reported to be on track to yield as well as or better than the bumper crops harvested in 2016.

However, Mr Moloney said they could still be hit by frost, and would need a kind finish to enable them to realise their yield potential.

This compared with a new-crop Melbourne delivered price of $266-$270/t which was attracting minimal interest from growers.

“There are not a lot of growers who are keen to engage because of the production risk; frost damage could be significant, and if you were a grower in the Wimmera, you’d have to think the market had potential to rally further.”

Some wheat and barley crops which were in good shape one month ago now appear to be in danger of losing up to 20 or even 30 per cent of their yield.

The northern Riverina is said to have been particularly hard hit, but agronomists said it would take a week or so until the extent of the most recent frost was known.

Landmark Ariah Park agronomist, Jamie Pursehouse, said some low-lying areas of paddocks might have incurred total crop losses due to frost, whereas losses on higher ground could be limited to 20-30pc.

“The dry is really starting to bite, and there could be more frosts yet.”

Mr Pursehouse said some growers were opting to let stock in on failing cereals to get some grazing value out of them, but most crops looked like they would yield some commercial tonnage.