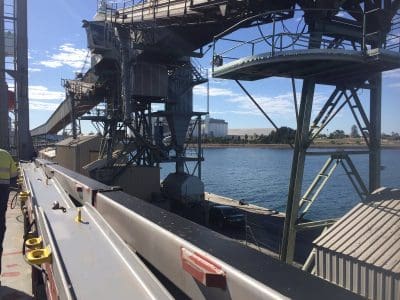 In its monthly receivals report, Viterra said exports had been steady out of Viterra’s six ports, with more than 1.2Mt shipped so far.

“Crops around the Port Giles area in particular performed a lot better than other areas, and finished off well, which was a great surprise for growers down there,” Mr Tansley said.

“Port Giles’ total wasn’t far off last year’s record, and quite an achievement, given the below-average result for the rest of the state.

“Ardrossan’s lentil crop was also bigger than expected, and Wallaroo continues to be our busiest receival site.”

Viterra’s Bordertown site broke its receival record this harvest, taking in 37,700t to help take the eastern region’s receivals to 1.34Mt, following the delivery of 57,315t since 1 January.

Growers are encouraged to visit the Viterra website for further information on which sites and grades are available and to arrange a time to deliver their grain.

While most Viterra sites have now closed for the season, the company has advised selected sites are taking deliveries by appointment.

The company has invited growers to complete a survey by 18 February about the company’s performance during harvest.