WEST Australian bulk handler, CBH Group, has received 9.22 million tonnes (Mt) of grain, close to 80 per cent of the total expected, in the state’s harvest as of 7 December. 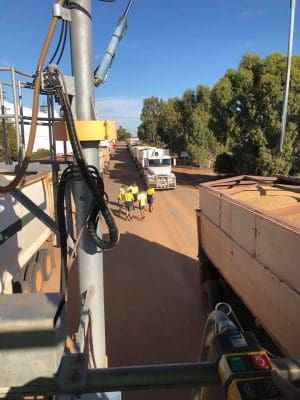 The line-up at CBH’s Ballidu site in the Kwinana zone. Photo: Emily Thorne

In its latest weekly harvest report, CBH said it has taking in 1.95Mt of grain in the week to Friday.

This was despite rain interrupting harvest programs for the southern portion of the state, and the closure of some sites in the Geraldton and Kwinana zones as harvest programs wrap up in the north.

Geraldton has surpassed its estimated 1.2Mt and is on track to receive 1.5Mt, with the zone now currently at 115pc of estimated deliveries, while the Kwinana and Esperance zones are both at 80pc, and Albany is at 59pc.

Following falls of 1-10 millimetres across the zone, some growers were able to resume harvest again after one day and others had to wait up to five days to resume before continuing which slowed harvest progress,.

Most of the Albany’s zones canola has now been received, barley deliveries are estimated at 70pc complete, and growers have started to transition to their wheat programs.

Grain quality continues to be good, with 35pc of barley being received into malting grades, and canola oil averaging in the high 40pc range.

Wheat receivals are now at 20pc of CBH’s estimate, and the company said 40pc has been ASW1.

“With improving weather forecast, we expect that receivals will again ramp up over the next week,” Albany zone manager, Greg Thornton, said.

The Esperance zone has had another week of inclement weather to slow deliveries and prolong the harvest.

“A lot of growers have finished harvest and are carting grain stored on farm,” Esperance zone manager, Mick Daw, said.

“A run of good weather for a week will see many more growers finish up for the year.”

Geraldton has had a steady week with 182,000 tonnes received in the past week.

“Currently we are sitting on 1.36mt, well over our estimate of 1.2 million tonnes,” Geraldton zone manager, Duncan Gray, said.

“I don’t see us having any problems getting to 1.5Mt by the end of the week.”

Following a week of site closures as harvest draws to its end, Carnamah, Mingenew, Moonyoonooka, Mullewa, Northampton and the Port of Geraldton are the only sites left open in the zone.

The Kwinana Zone received 950,000t in the past week, or 76pc of its estimated intake.

“Rain in the south of the zone slowed receivals at the start of the week but we are now back in full swing,” Kwinana assistant zone manager, Allan Walker, said.

Canola and barley receivals have slowed right down, and delivery focus has now switched to wheat, which CBH said has been of good quality so far.

“Some growers in the north and east of the zone have finished their harvest programs and with good weather conditions expected over the next week, we will start to see a lot more finish up,” Mr Walker said.