GENETIC researchers have gone wild in their hunt for wheat proteins that result in better bread. 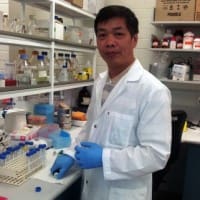 An investigation by Murdoch University PhD student Yujuan Zhang and her supervisor Professor Wujun Ma into the genetic diversity of wild wheat has revealed some promising results for modern day bread.

“We were searching for characteristics that could improve modern day bread such as a recently identified wheat grain gluten protein class,” Professor Ma said.

“This protein class was an exciting discovery, but as it has a low genetic diversity in modern bread wheat, it will be difficult to use in wheat breeding.”

Thinking more broadly about ways to tackle this issue, the researchers investigated the genetic origins of modern wheat, and examined the genes of wild wheat (emmer) from Israel.

“This species of wild wheat is the evolutionary ancestor of bread wheat,” Professor Ma said.

“It is not exactly the same – wild wheat has two genomes instead of the three genomes found in modern day wheat – but the two types of wheat can still be crossed successfully through traditional breeding techniques.

“The interesting thing about wild wheat is that it has not been subjected to selective breeding through cultivation by farmers over many generations. This means it still has a wide genetic diversity which we can use for modern wheat improvement.”

The team hit the jackpot, not only discovering a wide range of genetic diversity for the gluten protein that causes so many complications for wheat allergy sufferers, but also an entirely new understanding of the properties of the gluten protein.

“Until now, gluten proteins were only thought to be a source of nutrition for seed germination, but we discovered the new gluten protein also plays a role in anti-fungal infection. This has very significant implications for future wheat breeding,” Professor Ma said.

“The genetic richness of wild wheat opens a huge range of opportunities for future improvements in modern wheat breeding, which will be particularly important to cope with new environmental conditions caused by climate change.”