Growers get jump on soil-borne diseases

GROWERS across the southern cropping region are avoiding extensive yield and economic losses by knowing the risk of soil-borne diseases before they begin sowing this year’s crops. 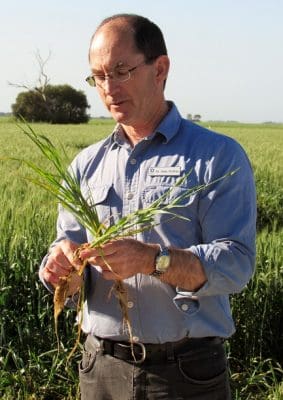 Many growers in South Australia, Victoria and Tasmania have already had their soils tested to determine the levels of disease-causing pathogens present through the PREDICTA B DNA-based soil testing service.

Results of those tests indicate that take-all is at slightly higher levels than last year, with around 21 per cent of samples tested showing a medium to high disease risk, according to SARDI principal scientist Dr Alan McKay.

“The risk of crown rot in the southern region has declined, with 22pc of 2017 samples so far in the medium to high disease risk category, compared with almost double that last year. That is most likely due to greater breakdown of inoculum in break crops,” he said.

The risk of yield loss caused by rhizoctonia, root lesion nematode and cereal cyst nematode is similar to last year at 27pc, 5pc and 1pc of samples tested respectively. Medium to high levels of eyespot have been detected in 15pc of samples from SA.

Diseases can also lead to reduced crop competition for weeds, increased crop damage from some herbicides and a reduction in cropping options.

“But if growers know which soil-borne pathogens are in their soils prior to seeding, they can take evasive action and avoid potentially serious crop losses,” Dr McKay said.

By using PREDICTA B, a unique DNA testing service for soil-borne pathogens, and combined with advice from an accredited agronomist, growers can implement management strategies before losses occur.