“We used to have to get up out of the shoe box in the middle of the night and lick the road clean with our tongues, eat half a handful of freezing cold gravel for dinner working 24 hours a day at mill and when we go home our dad would slice us in two with a bread knife.  And you tell that to the young people of today and they won’t believe you.” – Monty Python

FOUR years ago, we suggested in AHRI insight that farmers were spoiled for choice with five harvest weed seed control tools to choose from with a sixth in development.

Well, a lot has happened since then.

Back in 2014 we had a tow behind Harrington Seed Destructor and what we now call chaff lining was called windrow rotting.

We now have seven harvest weed seed control tools to choose from, so if farmers were spoiled for choice in 2014 they are absolutely spoiled rotten now!

We thought it high time to update you on all of the choices that farmers have to choose from when it comes to HWSC along with what we now know about the cost of operating the various HWSC tools.

There’s now something for everyone!

“We used to have to get up in the middle of the night half an hour before we went to bed, check the weather on the internet, and go out into the freezing cold to burn narrow windrows, hold a fire bug out the window of the ute until our arms fell off, and if the fire got away we had to call all of our neighbours and go and fight it. And you try and tell that to the young farmers of today and they won’t believe you”. How much does HWSC cost?

To work this out we need to decide on farm size and crop yield. This will, of course, vary for every farmer and by giving you the numbers you’ll be able to make a more accurate estimate for your farm.

The assumptions we have used are: A few explanatory notes on our estimation of costs

We don’t know the true depreciation cost of these tools. Ten per cent depreciation was used as this is an industry standard used by farm consultants for farm machinery depreciation.

Windrow burning appears to be low cost until we factor in the nutrient cost. Estimating nutrient cost is not straight forward!  Firstly we have only counted half of the total value of nutrients as we know that not all of the nutrients retained in the residue are available to following crops.  If we count all of the nutrients we can double this number. Some soils have very high potassium levels, so we could roughly halve the nutrient costs on these soils. In some cases, removing some residue can reduce nitrogen tie up and actually reduce nitrogen costs. At the end of the day, some nutrients are lost or redistributed in narrow windrow burning and the cost estimate that we have used is just that, an estimate.

The nutrient cost of chaff cart, chaff tramline and chaff line may possibly be removed for growers who are grazing these paddocks as sheep redistribute the nutrients, but not the weed seeds to the rest of the paddock. Only 1-3pc of weed seeds survive passage through the sheep gut. This could make chaff lining and chaff tramlining almost free, but a word of caution, we need to measure this to confirm.

The running costs of the seed destroying mills were taken from the Kondinin group report and have been made available via WeedSmart. You can read it here https://weedsmart.org.au/wp-content/uploads/2018/06/RR_1802_weedsmart.pdf  This is an excellent report and is highly recommended for anyone considering adopting harvest weed seed control.

The numbers used for the bale direct are very much a rough estimate only. If you’re considering this option you’re advised to contact www.primarysales.com.au

The capital cost of the chaff line system was taken from the commercial kit that is sold by Westoz Boilermaking. They make an excellent, reliable product.  Many growers are modifying their own harvesters at very low cost.

The capital cost of chaff tramlining was taken from the EMAR chaff deck that is sold by Primary Sales.  The cost of the chaff deck varies a little between different harvester makes and model.  The $20,000 capital cost that we have used is at the upper end of this cost.

Which of these seven tools are Australian grain growers adopting?

A GRDC funded grower practices survey led by Rick Llewellyn from CSIRO surveyed 600 grain growers after harvest 2014. The survey showed that 43pc of grain growers were using harvest weed seed control, with narrow windrow burning being the most popular practice making up 30 of the 43pc.

These are very encouraging levels of adoption, however if we do the maths based on what percentage of their crop that growers said they were treating with HWSC it works out that only about 15pc of the Australian grain crop is treated with one of the HWSC tools. A short online survey was conducted by WeedSmart and promoted on Twitter in 2017. These results may have a little bias as it was completed by growers who were already following WeedSmart.
However, the results were extremely encouraging and show that many grain growers are moving away from doing nothing and windrow burning and are planning to adopt chaff lining, chaff tramlining or one of the seed destroying mills.

This is a positive result as these tools remove the need to burn, have less nutrient drain, and are tools that can be adopted over an entire cropping program. 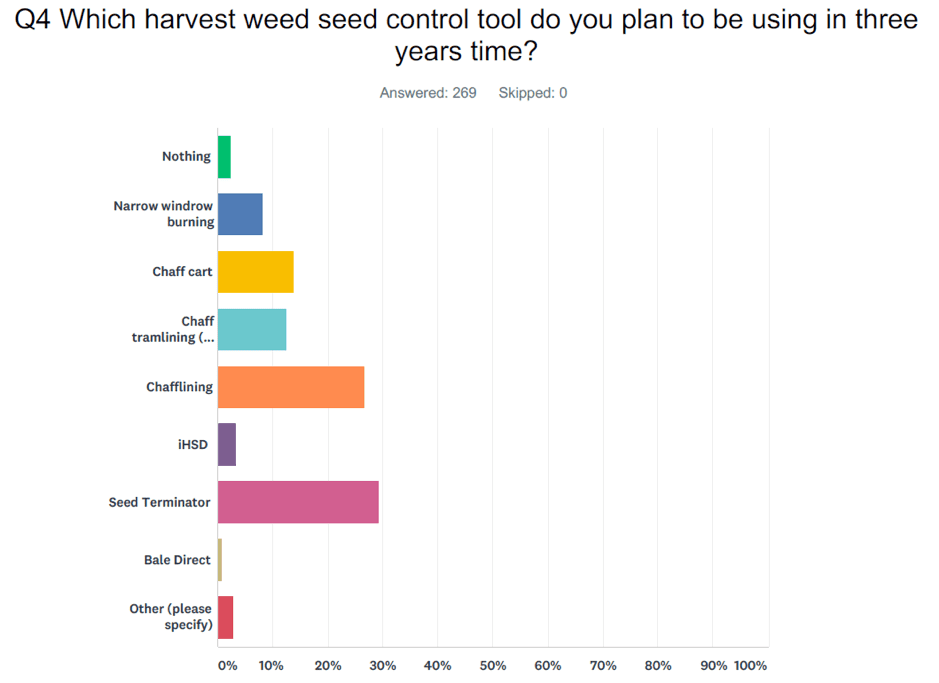 Based on all of this, we believe that harvest weed seed control could be practiced by 80pc of Australian grain growers over at least 50pc of the entire Australian grain crop by harvest 2021.

And you try and tell that to the young farmers of today and they will believe you!