THE first loads of grain from this year’s winter crop harvest in South Australia have begun rolling into the state’s storages as growers gear up for the main harvest which is set to move into full swing in early November. 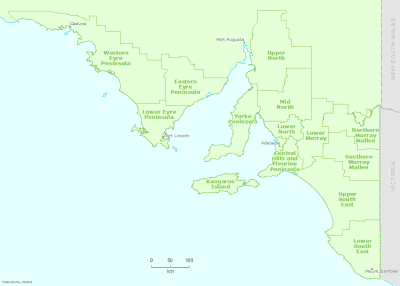 SA cropping districts: Crop prospects are looking good for SA as harvest gets underway, despite earlier storms causing lodging and disease issues in crops in the central growing districts.

Peas and a few loads of barley have already made their way into the system on the Eyre Peninsula and canola crops are being swathed or sprayed in preparation for harvest.

GRDC board member and grain grower at Pinery in SA’s Lower North, Andrew Barr, said the wild weather that hit the state in recent weeks had impacted on many crops, particularly in the growing areas east of Spencer Gulf.

“A lot of the oaten hay crops were on the brink of cutting and lodged badly. It has been one of the most difficult seasons we have seen for cutting and conditioning hay,” he said.

“In my case I have a 10-tonne hay crop that I’ll be lucky to get seven tonnes from because the bottom is so lodged it has been very difficult to cut.”

Dr Barr said a number of barley crops that were in the late flowering to late milk stage when the storm hit had lodged and would have trouble filling grain.

Conversely, the mild spring meant those barley crops that stood up would produce exceptional yields.

It was a similar story for wheat that had come through the storm well with hardly any lodging.

“So, for farmers relying on cereals the overall impact would be a net positive, unless you were going to cut hay or you had an early sown barley crop that was tall,” he said.

Dr Barr said the wild, wet weather had had a significant impact on pulse crops with diseases such as Ascochyta blight flaring in many areas.

“It has been hard work protecting chickpea crops. For those of us who grow chickpeas, I have done four fungicide applications and am about to do my fifth. That is setting new records for us for managing chickpeas,” he said.

Dr Barr said harvesting operations would be slow this season because the crops had such massive biomass. It would be a ‘double whammy’ for those with crops that had lodged.

“Even for the crops that are standing it is going to be a slow process. They will make the harvesters work pretty hard – which is a good thing,” he said.

Australian Grain Growers Co-operative chair and Eyre Peninsula farmer, Andrew Polkinghorne, said while a few early crops had been stripped on the peninsula, the main harvest was still a couple of weeks away.

“There has been some canola swathed and there will be significantly more areas of canola either swathed or sprayed out in the next week to 10 days,” he said.

“But it is hard to see much harvest activity happening before November 1 because the conditions have been quite cool and the crops are later than the last few years.”

Mr Polkinghorne said generally speaking crops on the Eyre Peninsula were in very good shape and had excellent potential despite the wild storms that swept across South Australia in September.

“There has been some localised damage from the storms and individual farmers have had significant losses, but overall the damage has been minor,” he said.

“There is frost damage on the central part of the peninsula, but again that is modest.

“Farmers are waiting for the rain to stop so crops can ripen and they can get into it.” 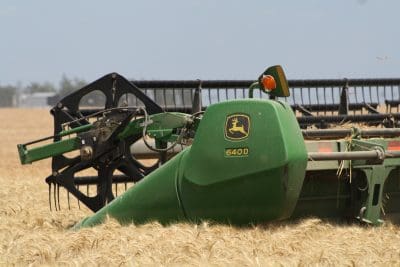 The wet spring in SA has improved yield prospects but delayed harvest.

“Viterra is well-prepared for a large crop after investing in new elevation equipment and is currently building around 500,000 tonnes of extra storage across the state.

“We are well on track to employ almost 1700 extra people for the harvest period, mostly in regional areas, to ensure our customer service meets the needs of growers, exporters and domestic customers.

“The quality, food safety and reliability that is assured through the Viterra storage and handling network assists us to connect growers and customers.

“There are around 40 buyers within Viterra’s storage and handling system, competing to buy grain directly from growers. Many exporters have already booked shipping capacity from South Australia for the 2016/17 season.”

New season grain exports are expected to start soon, with Glencore Grain one of the largest exporters of Australian grain.

“Glencore Grain will be a strong buyer of all commodities and offers reliable and swift payment terms to growers,” Mr Hughes said.

“With production increasing around the world for many commodities, it is important we run an efficient supply chain to ensure Australian grain and pulses are competitive in the international market.”

In its September crop report that was released before the damaging weather, Department of Primary Industries and Regions, South Australia (PIRSA) was estimating the state would produce 5.3 million tonnes of bread wheats, 161,590t of durum wheat and 2.173mt of barley as part of an overall winter crop for SA of 8.887mt.