Has herbicide resistance in ryegrass in WA plateaued?

A RECENT survey of ryegrass resistance to herbicides in Western Australia has found resistance hasn’t developed as much as expected.

Data from the latest survey in 2015 suggests resistance in ryegrass has not increased dramatically for commonly used herbicides (Figure 1), though there have been small changes in resistance frequencies. 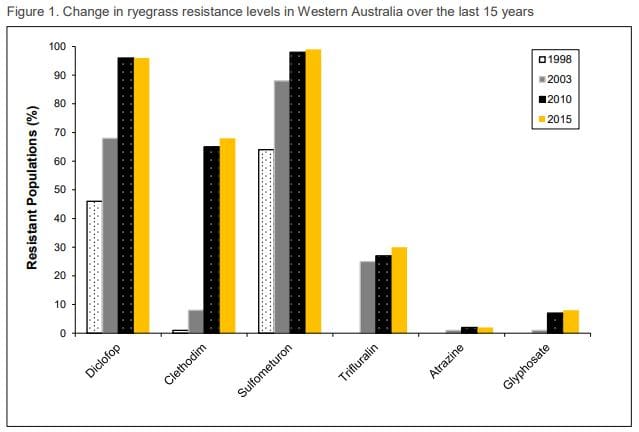 The latest AHRI Insight says Dr Owen found the percentage of paddocks with resistant ryegrass had only risen slightly since the last survey in 2010.

The work reported on all levels of resistance, with more than 1 per cent survival to a herbicide.

“The latest results from the AHRI random ryegrass resistance survey of WA led by Dr Mechelle Owen isn’t necessarily good news, but it’s about as good as we could have hoped. “It’s no surprise that resistance to the sulfonylurea (SU), and Fop (Diclofop) herbicides didn’t worsen from 2010 to 2015, as these herbicides were already totally shot. What was surprising, was that resistance to clethodim (Dim) and trifluralin and glyphosate was roughly the same in 2015 as it was in 2010. This was a very pleasant surprise.

“Why is it so? Perhaps it’s simply that resistance evolves slower to these herbicides than herbicides such as Fops and SUs. Or, could it be that we’re on the right track with managing resistant weeds in WA using a diverse range of tools to delay resistance evolution? It’s likely to be a bit of both.” Speaking at the Grains Research and Development Corporation (GRDC) Research Update in Perth last week, Dr Owen said annual ryegrass resistance to Group A and B herbicides was quite common across all of Australia, and trifluralin resistance was starting to increase.

“High levels of resistance to the Group A and B herbicides in annual ryegrass is evident across all areas of the WA grain belt, while other herbicides such as glyphosate, trifluralin and atrazine generally provide good control for most populations dependent on the location,” she said.

To manage the situation, Dr Owen said it was important for farmers to know the resistance status for an individual field, as resistance patterns varied between fields and location.

“In WA, even though resistance is widespread for ryegrass, plant density in most fields was around 1 plant/square metre, indicating that farmers are still able to keep weed numbers relatively small by employing a range of weed control methods including harvest weed seed management techniques which prevent seeds from re-entering the seed bank,” she said.

“The challenge is to use a wide range of integrated weed management options that help achieve herbicide sustainability and thus productivity of cropping systems.”

Of the 500 fields visited in 2015, four of these fields contained ryegrass that was susceptible to SU herbicides. There were high levels of resistance to this herbicide in 2010 and that’s still the case.  This may seem obvious, but it does confirm what we have always said, that resistance is permanent.  In the absence of a fitness penalty, once a population of weeds becomes resistant, it stays that way.

As for SU herbicides, there were very high levels of resistance in 2010 and this is still the case.

This was the big surprise package in the 2015 survey. We saw a large shift in resistance from 2003 survey to the 2010 survey, and naturally we expected to see a large increase in 2015, however resistance levels in 2015 were similar to 2010. Having said that, we now have 44pc of paddocks in a random survey with resistance to a high rate of clethodim, which is of great concern. Keep in mind that the tested plants in this survey were grown outside in winter conditions in 2016, so the concerns of getting better than expected results with clethodim when plants are tested in warm, summer conditions are not relevant here.

Glyphosate resistance has remained about the same from 2010 to 2015. We must be cautious with this result as we know that when resistance to a herbicide is relatively rare it can be hard to pick up with a random survey. Other more targeted surveys have found much higher levels of glyphosate resistance. It’s encouraging nonetheless. This map shows glyphosate resistance levels in WA. In 2010 they were 7pc and in 2015, slightly increased to 8pc.

This survey found no populations with any resistance to paraquat. It’s hard to find very rare resistance genes with a random survey but it’s a good result nonetheless.

No resistance to Sakura (pyroxasulfone) was found in this survey.

Perhaps one of the surprises of this survey was that 11pc of the populations were found to be developing resistance (1-19% survival) to Boxer Gold (prosulfocarb + s-metolachlor). It’s possible that this cross-resistance is due to P450 enzymes that have built up during years of selection with other herbicides resulting in low level resistance to Boxer Gold. Dr Owen tested many of these populations three times to confirm this result.

The results that have been reported here are 1pc survival or greater. We generally refer to developing resistance as being 1pc to 20pc survival, and resistant as greater than 20pc survival to a herbicide. As we dig deeper into the data we may find a shift in the level of resistance within the populations, so while we have reported here that resistance levels have stayed about the same from 2010 to 2015, there may be a little more to the story in time to come.

It’s encouraging to see that ryegrass resistance hasn’t moved as far as we may have expected in the past five years. Perhaps the diverse weed management practices that are being used by WA growers are paying off. This result should encourage us to try and keep these levels this way when the next survey comes around in 2020. Resistance may not regress, but holding it level is the next best thing.