UNITED States Department of Agriculture (USDA) analysts predict Australian sorghum production for 2016/17 will reach 1.2 million tonnes (Mt), down 0.3Mt or 20 per cent from their prediction the previous month, and down 0.8Mt or 41pc from production last year.

The latest USDA crop report estimates the area of sorghum in Australia to be 0.44 million hectares, down 0.06 million from last month, and down 0.24 million or 35pc from last year.

The overall yield is forecast at 2.73t/ha, down 9pc from last month and 9pc below last year. 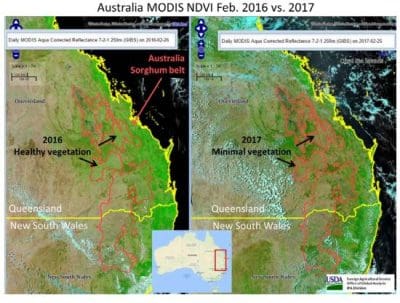 Late-season planting of sorghum is expected to be minimal because of unfavorable seasonal conditions over the past several weeks.

Near-record temperatures over summer further stressed the crop, which was already struggling from a lack of soil moisture. These conditions are expected to reduce yield.

Harvest of the early-planted crop began in February and continues through June.