THE fledgling hemp grain industry is steadily finding its feet with around 1000 hectares of the crop grown in eastern Australia this year and new investors lining up to expand the production area.

Since Australia and New Zealand legalised the production of low-THC hemp seed foods in November last year, interest in growing grain-producing lines of hemp has skyrocketed with proponents keen to tap into the premium ‘foodie’ market.

Brisbane-based agribusiness and agronomy services consultant, Rob Eccles, said the industry needed to push forward to build to a critical mass of more than 40,000ha to ensure its long-term viability. 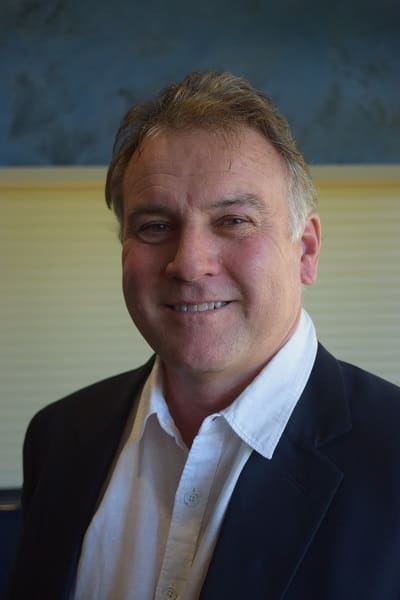 “The players involved are mostly urban-based and don’t have a strong handle on growing the crop or relationships with the farming community and their agricultural advisers.

“That’s what I am trying to tie in. I’m fitting in between them and the farm advisers, whom I call the gate keepers for launching a new industry. Until they are convinced they are going to get a good outcome for their clientele they are not going to grow the crop.

Not to be confused with narcotic hemp lines, agricultural races of hemp have miniscule levels of the psycho-active compound, THC, that is associated with drug use. Regulations require THC levels for farmed hemp to be below 0.3 per cent. Most agricultural varieties are much less than that, with some down to 0.02 to 0.05pc.

Speaking at a Crop Consultants Australia seminar in Narrabri, NSW, Mr Eccles said the key to successfully producing a hemp grain crop lay with sowing the crop at a critical time in relation to day length.

He said agricultural hemp plants could be grown as either a tall fibre crop or a short grain crop, depending on the sowing date and day length.

“Cannabis sativa sativa, which is the agricultural grain and fibre type with narrow, skinny plants and stems as thick as your thumb, can grow up to seven metres tall,” he said.

“So, to grow a grain crop you need to choose a planting date when the day length is declining.”

However, Mr Eccles said it was even more complicated than that because different varieties performed differently. 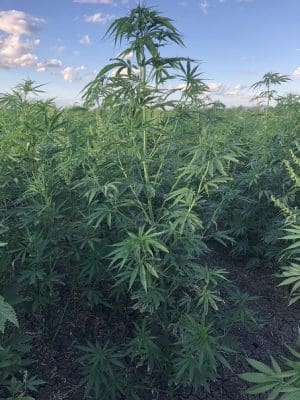 “Some plants are triggered immediately when they experience the day length shortening and will grow an under-developed plant only 30-60 centimetres high and it won’t have enough grunt to develop a good seed head. So, you have to sow them before the longest day, which might be November/October. If you go too early, it will get too tall,” he said.

“There are other varieties that will delay day-length sensitivity and you will get a reasonable sized plant. You can plant them while the day length is declining, so the typical planting window is from November through to April, depending on the variety.”

Mr Eccles said it was crucial for growers purchasing seed to know their farm’s latitude and ask the supplier the right time to plant.

“That is critical. It is a big profit driver. If you can’t harvest the crop you won’t make any money,” he said.

“For example, there is one variety that you would plant in February in central NSW at 33 degrees latitude that would need to be planted in May if you were planting it in Queensland. There are some varieties you would only plant in Tasmania and wouldn’t dare go any further north because they won’t perform.”

There are potential varieties in the pipeline that some companies may test this coming year that are not day length sensitive to trigger flowering.

Mr Eccles said hemp was a high value crop with strong demand for the grain which is worth $2500 to $4000/tonne.

“There is enough know-how about the agronomy to grow about a 1.5 tonnes/hectare crop using existing varieties. People budgeting to grow the crop work on producing 700-900 kilograms/hectare,” he said.

However, with the industry still in the embryonic stage, there were a number of constraints holding back its rapid expansion.

“The problem is there is not a lot of planting seed or varieties that have a proven track record, so everyone is putting crops in at the innovative stage. About one-third of the crops don’t get harvested because people planted on the wrong date, or didn’t know they had to irrigate it regularly. They just don’t know the husbandry of the crop,” he said.

Mr Eccles said at this stage the crop should only be grown as an irrigated crop, not dryland.

“It has a tap root and everyone thinks it is drought proof and can be grown as a dryland crop, but you don’t get a very good yield,” he said.

“The agricultural, sativa-type has a very shallow root system that only draws 20-30 centimetres deep, so you can have a metre of subsoil moisture but it is a waste because it is the top 20cm or so that is important.” 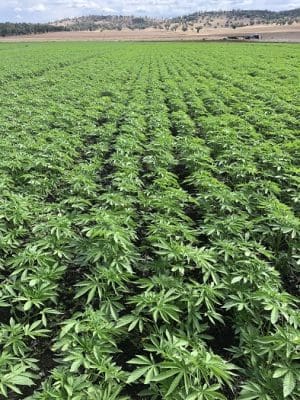 Hemp can be grown at all latitudes in Australia, as long as the right variety is selected, and is considered a 100-120-day crop from the day of planting to the day of harvesting the grain.

Soil wise, it doesn’t like acidity or salinity and needs soil pH levels of 6 to low 7.

“Whether you are on the coast or inland, you want a soil that is known to be able to grow maize. If you can grow maize, you will be able to grow hemp. That is to do with the quality of the soil, general fertility, structure and drainage,” Mr Eccles said.

“If you are inland where lucerne will grow, another check is that if lucerne lives for a few years without drowning, a hemp crop will grow there because it is sensitive to waterlogging.”

Mr Eccles said farms already equipped to grow broadacre grain crops would have all they needed to grow a hemp crop.

He said there were sufficient pesticide permits to cover the herbicide, insecticide and fungicide requirements, although the crop had its own natural defences which meant it could almost be grown pesticide-free.

“The plant has small glands known as trichomes that stick out with a glob of oil on them that act as a defence against disease and insects. The only real pest threat is there is a small window of opportunity for heliothis to eat the grain during grain fill,” he said. Agricultural hemp plants have grain heads similar in style to sorghum and fine, lime-coloured leaves similar to those widely recognised on the narcotic plants.

“By contrast, the medicinal and narcotic types have dark, olive green, fat leaves. If anyone tries to sneak one of those types of plants into a paddock it will stand out,” Mr Eccles said.

When it comes to harvesting hemp, the closest comparison is with harvesting canola.

It can be defoliated as an option and, as in the canola industry, there is debate over whether to windrow or direct head it.

“Everyone in Australia so far has direct headed. In Canada, they are the biggest producer growing about 40,000 hectares of hemp a year for the last five or six years, they windrow and direct head,” Mr Eccles said.

“If the crop is in a situation where it is getting some frosts, that helps direct heading enormously and negates the need for any desiccant.”

Hemp grain, which is about the size of a sorghum grain, is an oilseed that yields about 33 per cent oil. 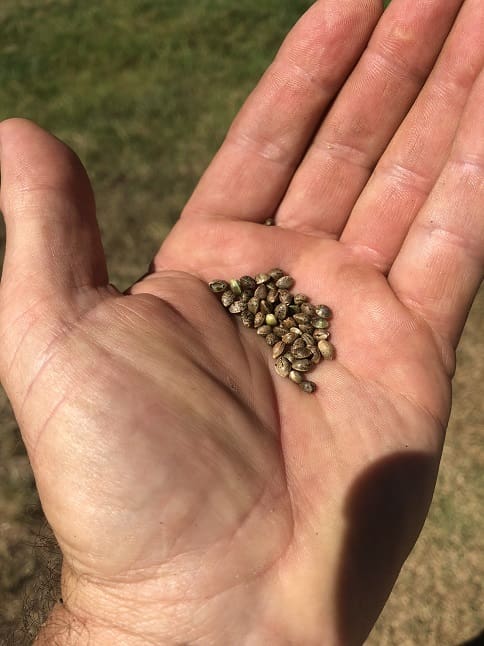 Hemp grain is about the size of sorghum grain.

The oil sells for a premium and has a nutty flavour which is finding its place in the food industry for salad dressings and flavouring.

“It doesn’t like high heat, so it is not a cooking oil. It can be used as a one-off, consumable, low heat, stir fry oil, but you wouldn’t use if for deep frying. You certainly wouldn’t multi-use it – it is a one-use only product,” Mr Eccles said.

“After the oil has been pressed out of it, the residue is highly valuable and is used for protein meals. At the moment that is going into the gym and health food markets.”

The hemp growing industry in Australia is highly regulated. The strict provisions include: