SOME Western Australian growers may need to be particularly vigilant about post-emergent weed control this season given numbers of germinating weeds could be high in certain regions following recent rainfall. 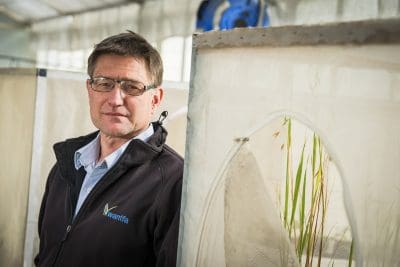 WANTFA executive director David Minkey says conditions at seeding time in WA this year may have compromised the effectiveness of pre-emergent herbicides in some situations. (Photo: Evan Collis Photography)

Trials conducted by the WA No Tillage Farmers Association (WANTFA) in 2015 and 2016 showed that, while the rate of decay of pre-emergent herbicides was more rapid in wet and warm conditions, some commonly used products could degrade by about 10 per cent per week, even when there was a lack of soil moisture.

WANTFA executive director David Minkey said the trials were carried out at Cunderdin, with Grains Research and Development Corporation (GRDC) investment, and showed trifluralin (as TriflurX); prosulfocarb plus S-Metolachlor (as Boxer Gold); and pyroxasulfone (as Sakura) decayed slowly, but at different rates, over five or six weeks in dry soils.

“Sakura had the slowest decay rates, followed by Boxer Gold and then TriflurX,” he said.

“However, these decay rates varied according to soil temperature, with pre-emergent herbicides applied earlier, when soil temperatures were warmer, decaying faster than later applied treatments.

“Soil type had a minimal effect on the persistence rates of pre-emergent herbicides.”

Dr Minkey said that while persistence rates varied for different pre-emergent herbicides, most WA growers could be confident that herbicides would not have decayed significantly if they had been applied in April or May this year and there had been minimal follow-up rain.

“However, pre-emergent herbicide applications exposed to about 10 millimetres of rain within the past three weeks will have decayed significantly,” he said.

“Under these conditions, growers who are yet to apply pre-emergent herbicides in some paddocks are advised to consider using longer residual pre-emergent herbicides, or increase typical application rates – ensuring they are following label instructions – to ensure an effective kill when weed germination occurs.

“They can consider using an alternative early post-emergent herbicide such as Boxer Gold, especially for effective suppression of annual ryegrass (Lolium rigidum), ensuring they are following label instructions.

“Alternatively, another tactic could be to increase the herbicide rates typically used to prolong efficacy in dry soils, while being mindful of the importance of adhering to product label recommendations.”

Dr Minkey said success would be optimised in paddocks that already had a low weed seed bank.

He said the WANTFA Cunderdin trials indicated using pre-emergent herbicides in dry soils when the seed bank was low led to improved wheat yields of up to one tonne per hectare. This was driven by good crop emergence and competition.

Dr Minkey said other research, conducted by Yaseen Khalil, as part of a PhD at The University of Western Australia, had cast light on which herbicides washed off wheat stubble with rainfall – and were therefore more available to control emerging weeds – and which herbicides were more tightly bound.

This project compared Sakura, trifluralin and Arcade (prosulfocarb) herbicides applied to wheat stubble and then washed off (simulating rainfall) using a range of techniques.