A GROUP of farmers in Central Queensland has banded together to set up their own, small-scale seed grader so they can retain the best seed possible for future sowings. 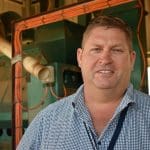 Manager of the group, Matthew Barnes, said the low-capacity unit had two parts – a sizing component and a suction separator – that were designed to grade a grain sample into three fractions.

“The idea is it sizes the seed. The bottom 50 per cent is discarded; the top 50pc the grower keeps for planting seed. The top 2pc of that is a premium seed. It is a much bigger seed. We want the biggest, heaviest seed you can get to use as the planting seed,” he said.

“That 2pc they use as their seed increase for next year. We find it has a germination of 99pc to 100pc.”

Mr Barnes said the three-stage process gave growers an assurance they were selecting the seed with the best potential.

“I think seed quality has always been off the radar of growers in Central Queensland because most people simply get the stalks and small grain taken out of it. I think there is more to it than that,” he said.

“The simplest thing a farmer can do is have good quality seed. They can get 10pc to 15pc yield increase simply by having good seed. There has been long term research in Western Australia where they have been grading seed for four years and still getting yield and quality increases.” 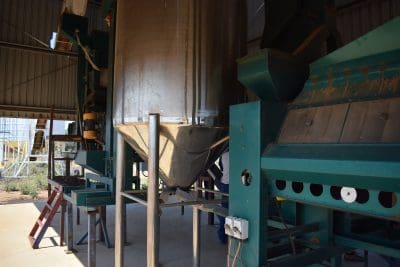 The farmer-owned seed grading plant at Emerald in Central Queensland.

“Especially if you are sowing onto infertile soils, to give the crop a good head start, retain seed which is not only large seed but which is high in nutrient content,” he said.

“If farmers have a mix of soil types, we always advise they try to retain seed off their best soil type to resow next year. If the soil where they are sowing is of low fertility, that can make a real difference in not only establishment but in early vigour of the crop.

“That is always a good policy to give the crop every chance of getting up and away as quickly and as vigorously as possible.”

Dr Wilhelm said while not many people had their seed tested at testing laboratories, it could be a useful strategy to further enhance seed viability and performance.

“Testing can give you a nutrient composition of the seed which could be useful when you are dealing with multiple soil types that might be low in certain nutrients. On the other side of things, you can check seeds to see if they are carrying disease,” he said.

In a 2016 GRDC fact sheet encouraging growers to test chickpea seed for pathology, germination and vigour, Pulse Australia’s northern region industry development manager, Paul McIntosh, said without knowing an accurate germination percentage of the seed, it was impossible for growers to determine the correct seeding rate to achieve the desired plant population for maximum yield potential.

He said current best practice was considered to be the targeting of 20 to 30 plants per square metre depending on soil type and sub soil moisture levels. Plant population below 20 plants can result in significantly reduced yields of 10 to 30 per cent.

“I have had instances in the past where grower retained seed has looked fine, however it only had a 30pc germination level,” Mr McIntosh said.

“Thankfully this was identified via a seed germination test and the grower was able to obtain a different seed source.

“If the original seed had been used then the farmer would have no other choice, but to perform a costly chickpea replant, especially with specific residual herbicides applied after the first planting event limiting planting options.”