How to manage a high moisture grain harvest

WITH harvest well underway in parts of the eastern Australian wheat belt and the realisation of the forecast wetter than average conditions, attention is now focussed on managing the harvest. Farming and grain handling infrastructure in much of the inland cropping areas is geared more towards the typical dry harvest.

In a year such as this, harvesting equipment can be sitting idle and crops exposed to risk of losses waiting for the grain to dry in field.

By “dry” we typically mean the GTA receival standards – 12.5 per cent moisture content for cereals, 8pc for canola and 14pc for pulses.

In the last few weeks, growers in many areas have been struggling to harvest at these levels.

Understanding the options to manage a higher moisture harvest is the key to getting through a harvest such as we are seeing.

There are three considerations when contemplating high moisture harvest;

The risk associated with storing high moisture grain is that the resultant air humidity within the grain promotes mould activity, which in turn leads to seed decay.

Mould activity is increased in warmer conditions and, in turn, it also results heat build-up.

So, the key to managing high moisture grain is to keep it cool (to minimise mould growth) and dry the grain prior to delivery.

Whilst the management of high moisture grain adds to the harvest workload, the alternative is delayed harvest, yield loss and potential downgrade.

Managing the higher moisture grain is generally achieved by blending and aeration.

Typically grain is harvested at a range of moistures.

Often, soon after a rain event or mornings will generally see higher moisture whereas later harvested grain may be drier.

The ability to blend (assuming the grain is the same quality) can manage the high moisture grain with minimal time and cost.

It is recommended that blended grain by aerated for one or two days to even out the moisture.

Grain can be safely held up to 14pc or 15pc moisture (for cereals) under a cooling aeration system.

Typically this would be a system where the distribution is well designed to ensure that air flow reaches all parts of the store (silo, shed or bunker) and that the air flow is sufficient to cool the grain quickly to safe temperatures.

The air flow recommended for silo storage is typically 3 to 4 litres per second per tonne. This provides an air change approximately every 3 minutes.

Normally the air selected for cooling provides only limited drying.

Anecdotally, cooling aeration can dry grain however it will be slow (weeks and months) and therefore this strategy is aimed primarily at maintained the grain safely until it can be blended or dried.

Higher flow aeration systems 15 litres/second/tonne and above, provided they have a uniform air distribution system can be used for drying the grain down. 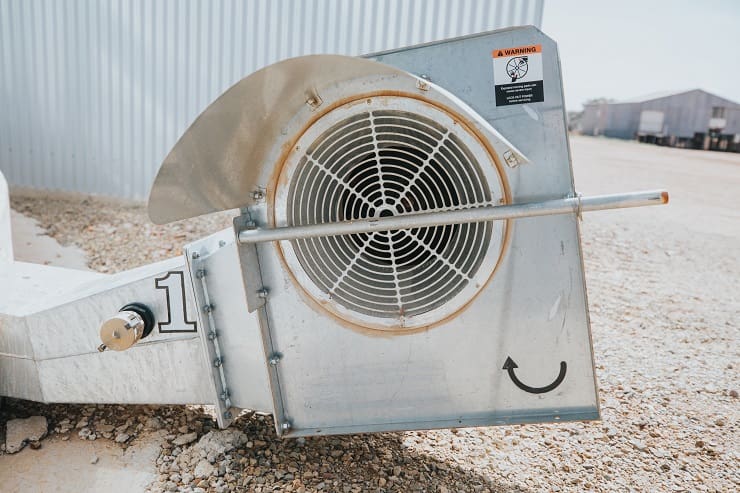 Typically this would allow wheat to be harvested at up to 18pc.

Drying with these air flows is still relatively slow (days and weeks).

The time to dry is very much dependant the air flow, the moisture content of the grain and the prevailing ambient weather conditions.

There are a few precautions that should be considered when storing higher moisture grain:

Andrew Kotzur is managing director of grain silo and storage manufacturing business, Kotzur, based at Walla Walla in southern NSW.