How wide should you go when deep ripping?

THE pros and cons of widening row spacing when deep ripping have been examined in trials by Western Australia’s Department of Agriculture and Food (DAFWA). 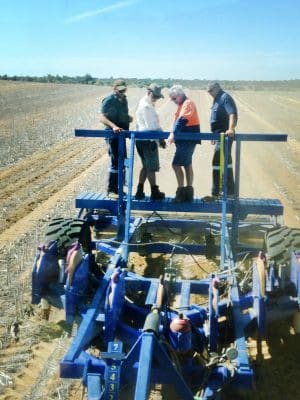 Kyle Carson, (of Binnu), Paul Blackwell (DAFWA), Rohan Ford (Balla) and Murray Carson (Binnu) look over the trial ripper to investigate topsoil slotting at the trial site in Binnu in 2016.

“The commonly practised width is between 45 centimetres to 60cm,” Mr Parker said.

“Our research compared crop yields when ripping at widths of 50cm and 100cm on yellow sandplain at Binnu and on clay loam and gravel soils at Dalwallinu.”

The trials, supported by the Grains Research and Development Corporation, used a 3.5-metre trial ripper with topsoil slotting plates, ripping to depths of 30cm and 50cm.

“However, such compromise enables deeper ripping, efficient use of horsepower, increased hectares per hour and reduced fuel use when using the same ripping width.

“This is something to consider, particularly over larger programs and when confronted with a deeper hard pan.”

“If unable to get beneath the hard pan and still pull the ripper, it is advisable to increase tine spacing and add winged points, or reduce the total ripping width to break below the hard pan,” he said.

“During 2016, growers trying to rip below 40cm were unable to pull their 12m rippers unless they reduced the number of tines and reduced ripping width or reduced ripping depth.

“It is likely that yield response will be greater when ripping beneath the hard pan, irrespective of tine spacing, so 100cm spacing may have a fit in this situation as a smaller benefit is preferred to none.

“From an economic perspective, the impact from ripping at 100cm width needs to be at least 60 per cent of the yield response to ripping at 50cm, keeping in mind that this analysis is generated from one site in one season.”

“Traffic management is required post ripping to maintain the looseness of the soil and yield benefits this brings,” he said.

“Growers deep ripping need to consider it as part of a controlled traffic farming system.”

The paper will be available at the GRDC Grain Research Update, February 27-28, Perth.