CSIRO scientists have confirmed the hybridisation of two of the world’s major pest species – the cotton bollworm and the corn earworm – into a new mega-pest likely to be resistant to pesticides. 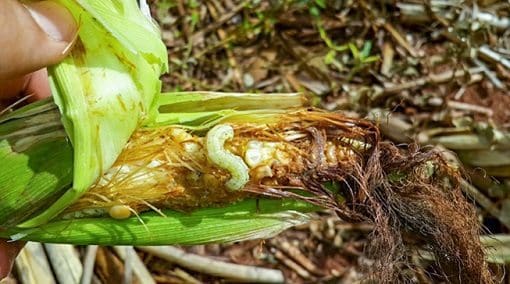 Researchers have found evidence of the hybridisation of moths from the two species in Brazil.

The cotton bollworm is widespread in Africa, Asia and Europe and causes damage to over 100 crops, including corn, cotton, tomato and soybean. Commonly found in Australia, it attacks more crops and develops much more resistance to pesticides than the earworm.

The corn earworm is a native of the Americas and has a comparatively limited resistance and host range.

However, the combination of the two, in a novel hybrid with unlimited geographical boundaries is cause for major concern.

“A hybrid such as this could go completely undetected should it invade another country,” research director leading CSIRO’s Biosecurity Risk Evaluation and Preparedness Program, Dr Paul De Barro, said.

“It is critical that we look beyond our own backyard to help fortify Australia’s defence and response to biosecurity threats.

“As Australia’s national science agency, we are constantly looking for new ways to protect the nation and technology like genome sequencing, is helping to tip the scales in our favour.”

While a combination of insecticides currently controls these pests well in Australia, scientists said it was important to study the pests themselves for sustainable long-term management world-wide.

The scientists confirmed that among the group of caterpillars studied, every individual was a hybrid.

“No two hybrids were the same suggesting a ‘hybrid swarm’ where multiple versions of different hybrids can be present within one population,” fellow CSIRO scientist, Dr Tom Walsh, said.

A concerning finding among the Brazilian hybrids was that one was 51 per cent earworm but included a known resistance gene from the bollworm.

Lead author of a paper published in the Proceedings of the National Academy of Sciences of the US,g Anderson and former CSIRO scientist now based at The University of Edinburgh, Dr Craig Anderson, believes the hybrid study has wide-ranging implications for the agricultural community across the Americas.

“On top of the impact already felt in South America, recent estimates that 65 per cent of the US’s agricultural output is at risk of being affected by the bollworm demonstrates that this work has the potential to instigate changes to research priorities that will have direct ramifications for the people of America, through the food on their tables and the clothes on their backs,” Dr Anderson said.