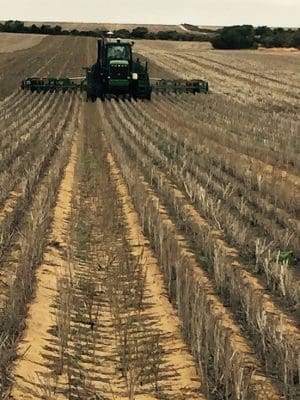 The impact on crop performance from trafficking in low rainfall zones has been found to be far less dramatic than in those of different soil types and climates.

The project’s four research sites (in Victoria, South Australia and NSW) show an impact on crop performance from trafficking on the soil, with a five to 30 per cent difference measured in severe traffic conditions.

At this point in the project the differences measured are not as large or as constant as found in the self-mulching clays of Queensland or the sandy soils of Western Australia.

The question now for researchers is why?

It is hoped this will be answered from two more years of measurements off the research sites and through activities to be undertaken by the five farmer groups who are partners of the project.

During the 2015 and 2016 seasons the Farming System Group Partners (FSGP) undertook various activities connected to CTF, such as the investigation of the effect of wheel tracks on crop yield in farmer paddocks of three of the FSGP in 2016.

Crop cuts on and off wheel tracks were taken just before harvest, weighed and the results indicated that in the majority of cases yields were higher in non-trafficked areas compared to on wheel tracks.

However, this was not always the case, raising the questions;

− Are the yield differences a result of wheel crushing of plants or is it the compaction effect?

− Why are some yields on wheel track better than off wheel
track?

It is hoped the FSGP will be able to undertake sampling again this season.

To demonstrate to farmers the impact that compaction can have on both soil and machinery performance the project is using a digital penetrometer and a ‘pullmeter’ on farmer paddocks and research sites.

The penetrometer records the soil resistance at varying depths as the rod (simulating a plant root) is pushed into the soil. This provides an insight into how tight a soil is across a determined width of paddock and to a depth of 50 centimetres.

The image below shows an example of interpreted data that has been collected using the penetrometer across a CTF paddock.

At the one metre, coinciding with a machinery wheel track, a spike in pressure is observed, indicating greater compaction and likely reduced root growth.

The ‘pullmeter’ allows landholders to measure the impact on their equipment of the rolling resistance of soil both on and off compacted wheel tracks.

Rolling resistance affects the energy and fuel required to move or pull machinery.

A paddock near Swan Hill was included, as part of a project ‘CTF Effects on Soil Emissions’, to collect data on greenhouse gas emissions and denitrification loss.

The data showed that trafficked areas in a barley crop lost twice the amount of greenhouse gas emissions (690 kg/ha carbon dioxide equivalent) and denitrification loss (more than  25kg/ha N) than the non-wheeled areas.

Emissions are highly variable, so we can be more confident of the ratio of losses from beds and wheeled soil than the absolute values, but they are in reasonable alignment with other tests in Victoria.