Is it possible to apply additional competition to inter-row weeds?

The inter-row space provides an ideal environment for weeds to grow, particularly if pre-emergent herbicides are not applied or are less effective than expected. 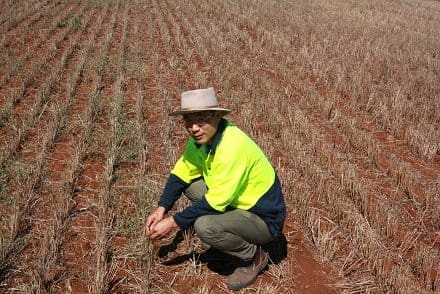 “There is very strong evidence that narrower rows are an excellent way to increase crop competitiveness but there are some practical limitations,” he said.

“We have looked at a combination approach, of planting most of the seed in rows and the rest broadcast to ‘fill in the gaps’. We have called this the ‘compound sowing technique’.”

In 2016 Dr Wu set up two field trials at different locations near Wagga Wagga, NSW to assess the effect of this system on weeds and crop yield in both narrow (22.5cm) and wider (45cm) row spacings, with and without IBS trifluralin.

Three broadcast species were evaluated – wheat, gland clover and French serradella. The two sites were assessed to have an initial annual ryegrass density of 48 and 25 plants/square metre. “We sprayed out the broadcast legumes in early September to prevent them competing with the crop for moisture,” Dr Wu said.

“Further trials are needed to test a range of parameters such as suitable legume species, optimal seeding rates, proportion of seed broadcast, row spacing for the conventional seeding and different pre-emergent herbicide options.”

Although the 2017 season did not allow Dr Wu to replicate this trial he is keen to do more trials in 2018.

“We think this technique has merit and our initial trial suggested that weed suppression can be achieved without any yield penalty,” he said.

“There even seems to be situations where a yield increase can be achieved in response to reduced weed pressure.”

Crop competition is rightfully attracting more attention from farmers and researchers in the war on herbicide resistant weeds.

It is a numbers game and crop competition can play an important role in vastly reducing weed seed set.

Which was the most competitive broadcast species?

What was the effect on yield?

Short answer: The wheat yield increased by 15–22pc at the weediest site when wheat was used as the broadcast species.

Longer answer: In the favourable season of 2016, only broadcast wheat generated a yield increase, and only in the presence of higher weed pressure. None of the broadcast treatments caused a yield reduction at either site. Further trials are required to evaluate the impact of site and seasonal climatic conditions on the weed control and crop yield associated with the compound sowing technique.

The broadcast legumes may provide additional soil fertility and moisture retention benefits while maintaining crop yields. More work is needed to identify more competitive legume species to have a greater impact on weed biomass and to identify the optimal timing to kill broadcast legumes to maximise weed suppression and minimise yield loss.

Have any farmers tried this idea?

Longer answer: Leigh Bryan at Swan Hill has tested this idea on his farm – he calls it zero-row spacing. Also in 2016, a strip-trial in barley resulted in the zero row spacing strip yielding 4.994 tonnes/hectare compared to 4.889t/ha in the conventionally sown crop at 37.5cm spacing. This was achieved with no pre-emergent or in-crop herbicide applied.

Leigh has noticed that the random placement of stubble is easier to sow through the next year and it still provides trellising for pulse crops and shades the soil to conserve moisture and reduce soil surface temperatures.