Is one-time tillage a viable weed control option in a no-till farming system?

Many would say the widespread adoption of no-till and minimum till farming underpinned the expansion of cropping in the northern farming region and saved many farming families from economic hardship. 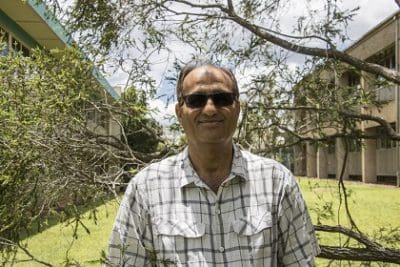 University of Queensland research fellow, Dr Yash Dang, says ‘no-till’ does not have to mean ‘never till’. Occasional cultivation can be used as a weed control tactic without having a detrimental effect on the soil resource.

While costs and erosion damage were reduced, the heavy reliance on herbicides has resulted in a significant shift toward weeds that can thrive in this farming system.

Weeds that were previously not considered a problem are now making farming unprofitable or impossible on some no-till paddocks.

University of Queensland senior research fellow, Dr Yash Dang, says the removal of cultivation has also led to an accumulation of certain immobile nutrients such as phosphorus, zinc and potassium in the dry surface layer of the soil where plant roots cannot access them.

“Cultivation has a role in distributing nutrients, managing soil and stubble borne diseases and controlling certain weeds,” he said.

“The complete removal of tillage for 15 to 20 years or more on some farms has led some farmers to the conclusion that they cannot continue as no-till farmers.”

Dr Dang undertook a four-year project, starting in 2012, to investigate the effect of tillage on a range of soil properties in no-till paddocks throughout the northern cropping region – from Emerald, Qld, to Dubbo, NSW.

“On well-structured soils there was no detrimental effect as a result of the cultivation. Even on more difficult soils, such as those with sodic subsoil or with hardsetting tendencies, one-off tillage operation at the correct soil moisture content caused only limited damage to the soil and repair was evident within two or three years.”

The research also demonstrated that cultivation is a viable weed control tactic within an otherwise no-till system, to prevent seed set of weeds such as fleabane and feathertop Rhodes grass, which flourish in a chemical-dominant control program.

“The positive effect on weed numbers is usually short-lived and has the potential to have negative effects in the years after cultivation,” he said.

“Growers considering the re-introduction of occasional cultivation must consider all the pros and cons. Cultivation is just another tool in an integrated weed management system – not a stand-alone solution.” The type of implement used for a one-off cultivation had little impact on the soil properties. Non-inversion tyne or disc implements provided effective weed control when used before weeds flowered and set seed.

How often should I use cultivation in my no-till system?

Short answer: As a last resort.

Longer answer: A move to no-till farming has provided significant benefits to the soil resource and to farmer’s profitability. This research does not suggest a return to full cultivation, however, the trials showed that one-off, occasional tillage does not have significant detrimental effects on the soil. Care is required in terms of timing, type and frequency of tillage on sodic soils and soils with hardsetting characteristics.

There is a soil moisture loss associated with cultivation so this should be taken into account when making the decision to cultivate.

When should I use tillage?

Short answer: Before the weeds flower and set seed.

Longer answer: Cultivation should be a last resort measure to treat patches or paddocks where the weed pressure has reached unacceptable levels and where the species present do not have seed that remains viable for many years once buried.

Weeds such as fleabane and feathertop Rhodes grass are good candidates for occasional tillage as a means of preventing seed set. Numbers of these species can be driven down quickly through a dedication to preventing seed set for just a few consecutive years.

In most situations a single pass cultivation is sufficient to achieve the desired effect of reducing the target weed population. If the problem is severe then this single pass operation may be required for a few consecutive years. Timing is critical to achieve good weed control while not sacrificing a planting opportunity.

What other benefits can I expect from occasional tillage?

Longer answer: Cultivation will speed up mineralisation in the soil and the breakdown of organic matter. The distribution of immobile nutrients, such as phosphorus, potassium and zinc, deeper into the plant root zone. In a no-till system these nutrients tend to accumulate in the top few centimetres of soil, which is often too dry for plant roots to access. The release of nutrients may support short-term yield response.

Cultivation will also disrupt insect and disease cycles, potentially improving yield and reducing control costs. Pathogens causing diseases such as crown rot of wheat, yellow spot of wheat, ascochyta blight of chickpea and stalk rot of sorghum, can build up in the stubble and soil in a no-till farming system. Likewise, soil insects such as Helicoverpa, armyworms and black field earwigs can proliferate in the surface soil.

What are the risks associated with occasional tillage?

Longer answer: Tillage is accompanied with a loss of soil moisture, however, at most of the trial sites stored moisture improved in subsequent years due to improved infiltration. If possible, cultivation should be done when there is a good chance of sufficient rainfall before the next planting opportunity. Mineralised nutrients and the soil itself is more exposed to runoff following cultivation.

In situations where weed seed has been buried previously, cultivation may bring these seeds back to the surface and initiate fresh germinations. Paddock history is an important consideration in the decision to cultivate.