WHILE the new transgenic cotton, Bollgard 3, offers additional resilience against Helicoverpa spp. with the inclusion of the Vip3A gene, there are growing risks of widespread insecticide resistance forming in many other pest species if the principles of integrated pest management are ignored. 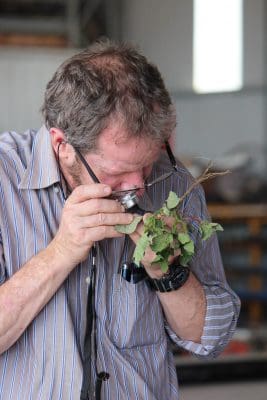 Researchers have recently detected rising levels of insecticide resistance in silverleaf whitefly (Bemsia tobacci) to a cornerstone product. Resistance in mites is present and sucking pests such as mirids could be next.

“If we drift into increased use of sprays in the belief that this is keeping retention high and pushing up yield then we risk the future that has happened in the United States’ Mississippi Delta.

“Growers there are now spraying more in Bt cotton than they were in conventional cotton.

“This is due to resistance to insecticides in Lygus, emerging Bt resistance in Helicoverpa and increasing secondary pest problems (mites) as a result of increased spraying.

“We don’t want to end up there, so we need to realise that while Bollgard 3 is a great platform for IPM, it also benefits from the support of a strong IPM system.”

In Australia, CRDC’s annual insecticide monitoring programs have detected increasing resistance to key products in silverleaf whitefly (SLW) and mites. Both are species that flare easily and require careful IPM to manage effectively.

Insecticide resistance monitoring is an essential component of the cotton industry’s Insect Resistance Management Strategy (IRMS) with results of the program used to ensure the IRMS remains effective and relevant to the country’s dynamic insect populations.

“We have found moderate resistance to Admiral (pyriproxyfen) in one location in Northern NSW this season,” Mr Hopkinson said.

“Concerning for us is that pyriproxyfen is a cornerstone product for SLW control, and should be limited to no more than one application per season.

“There is also widespread resistance to the neonicotinoid Shield (clothianidin) which isn’t registered for SLW but has the potential to cause management problems if used too often to control pests like mirids during the season, as it can reduce the numbers of natural enemies, but leave behind the whitefly as they are resistant.

“The detection of pyriproxyfen resistance and the anecdotal reports of increasing spraying going on in general is a concern and it’s great to see this industry conducting the IPM workshops around the regions.”

Part of his CRDC-funded team is NSW DPI entomologist Kate Marshall who is developing a method for testing mirids for insecticide resistance, as traditional methods do not work as mirids do not transit well and are difficult to establish in culture.

“IPM is the key to successful insect control because it includes all available control tools to achieve economic control,” Dr Herron said.

“If you suspect resistance has developed in your farming system remember you will usually not spray your way out of a resistance problem – just further into one.”

Resistance to abamectin in two-spotted mite (TSM) was rarely detected before 2010-2011, when resistance was found in three out of the four TSM strains tested. Since then abamectin resistance has been regularly detected increasing in both level and abundance.

Two-spotted spider mite has a history of developing resistance, as testing over has demonstrated over many years showing resistance forming to dimethoate/omethoate in the 1970s, through to bifenthrin in the 1990s and abamectin today. TSM resistance continues to evolve in Australian cotton and most recently caused chlorfenapyr failures.

“A common use pattern for abamectin has been to apply it in combination with mirid sprays as an ‘insurance spray’ against mites,” says CottonInfo IPM technical specialist, Sandra Williams.

“Mirid sprays can be disruptive to beneficials so the inclusion of abamectin reduces the risk of subsequent mite outbreaks – however, this practice may ultimately lead to abamectin failure against mites as it is still selecting for resistance in the mites even when they are at low levels.

“A wide range of beneficials will attack mites as food and in the low spray Bollgard environment, and beneficial abundance has broadly increased. This has meant that over the past 10 years mites have gradually declined in frequency as a problem.

“This would suggest that insurance sprays against mite outbreaks in most situations may be unnecessary, and may be having a negative impact by increasing the levels of abamectin resistance.

“Instead an alternative strategy to spraying is to monitor the mite population closely and the presence of predators in mite colonies – including thrips.”

Only if the mites are in reasonable numbers and increasing quickly would the addition of a mite spray be justified – and the selection of miticides should be in line with the IRMS. Further, selection of mirid control options that have less negative effect on beneficials and less risk of flaring mites will also further reduce the risk of mite outbreaks.

The IRMS advocates the use of Helicoverpa selective insecticides for supporting IPM in cotton. The windowing of these products in the strategy is designed to reduce selection pressure which is important, especially in the current season given the high Helicoverpa pressure particularly in Central Queensland. 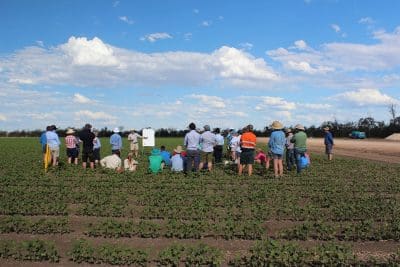 “This may indicate that a trend is emerging with indoxacarb resistance and highlights the need for compliance with the IRMS and using IPM for minimising resistance risk to this and other key selective insecticides.”

“Industry threshold provide guidance on when to control pests so as to maintain yields and quality,” CRDC R&D manager Susan Maas said.

“However we are seeing some concerning trends emerging and need to be proactive in our approach to insect management through IPM.

“It is concerning that although we don’t really see mite issues in Australia, we are seeing resistance, due to the use of prophylactic spraying. This was flagged in the IRMS this year where the need to use thresholds was highlighted.

“Knowing thresholds for control of insect pests are aces we hold in our hand: we know what populations have to be at to start causing damage, yet we are seeing untimely or unnecessary applications. This unnecessary spraying can then trigger problems in other pests and the problem amplifies.”

With this year ramping up to be a high pressure year, maintaining beneficial predators is going to be more important than ever and crop managers must choose products wisely in terms of the flow-on and flaring effect they may have later in the season. This signifies the need for IPM to be a year-round program.

IPM as a whole of season approach

“For example what are you doing for thrip management now? And how will that affect your options late season?” Susan says.

“We also need to get away from the thinking that because individual fields or hotspots have reached their threshold that the whole farm needs to be sprayed.

“If you hit mirid threshold in one field – don’t spray the whole farm – keep some beneficials in other areas.”

Regular flaring of insects such as SLW and mites can be a symptom of a loss of beneficials earlier in the season.

“If you have a lot of beneficials these pests can be less of a problem to manage,” Susan says.

The concern is we are seeing whitefly problems year-on-year which suggests they’re no longer just based on seasonal conditions – and at the same time we are seeing rising resistance levels to the best product we have for control.”

What happens when there are no control measures?

Mealybug is a pest that there are no good chemical control options for – it is only through IPM this pest can be managed.

The recent detection of Solenopsis mealybugs in Victoria is troubling to Susan Maas.

“When mealybug show up you will be looking back through what you’ve done during the season and wishing you had an IPM approach from the start,” she said.

To sign up for the fortnightly e-newsletter (and other CottonInfo communications) visit www.cottoninfo.com.au/subscribe