NEW Zealand farmers Eric and Maxine Watson have entered the renowned book of Guinness World Records after producing the world’s highest yielding crop of wheat on their 490-hectare farm near Ashburton. 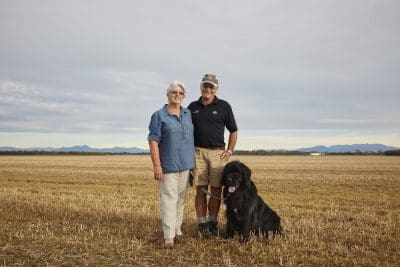 World record wheat growers, Eric and Maxine Watson, on their farm near Ashburton in the Canterbury region of New Zealand’s South Island.

The couple produced a staggering 16.791 tonnes per hectare, beating the previous record of 16.519t/ha held for two years by a United Kingdom farmer.

On average, irrigated wheat yields in New Zealand are around 12t/ha, demonstrating how remarkable the new record is.

The crop was planted in mid-April 2016 and harvested mid-February this year.

Mr Watson said it was a big relief to have achieved the record, especially after coming close in previous years.

“We’re absolutely delighted to have set a new record – I feel a bit overcome in a way, it’s quite an achievement,” he said.

“It’s a very good feeling after all these years of achieving high yields to get the world record, after all, it’s what we set out to do.

“We’ve been achieving high yields for several years but have never bothered about the world record. The record definitely became harder to achieve after the 16.5 tonne barrier was broken in the UK harvest of 2015. 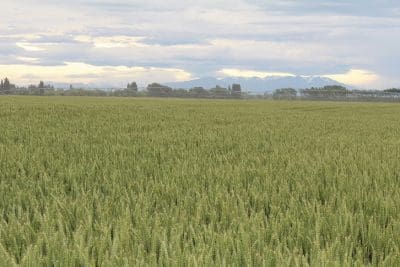 “Possibly one of the things that will come out of this is recognition of the New Zealand arable industry. It’s very small but there are some good farmers out there and it’s good to have the record back in New Zealand again.”

Bayer New Zealand Crop Science country manager, Scott Hanson, said the record was not only an important achievement for the Watsons, but for New Zealand as a whole.

“For me, the record demonstrates the skill set that we have in New Zealand in the arable industry. The New Zealand grain and seed industry is an important part of the global seed market. Farmers like Eric and Maxine demonstrate what New Zealand can do at a global level truly promotes our industry to the world,” he said.

“We hope that achievements such as this will help promote New Zealand as a global leader in growing grain and seed for both the local and global markets. Two years ago we worked with Warren Darling of Timaru to get the world record for barley. The addition of the wheat world record firmly puts New Zealand at the forefront of worldwide farming.

“In particular, the Canterbury region is demonstrating that it not only has the best arable growing conditions in the world, but also the best and most knowledgeable arable farmers in the world.

“Bayer is focused on improving crop yields through developing innovative products and crop management programmes. Our aim is to make New Zealand the highest yield producing country in the world.”

“Regular herbage testing was also a very important factor as this guided the timely inputs of foliar trace elements,” he said.

As for the future, Mr Watson believes he can do even better.

“It is an exceptional yield, but I could always do better and that’s my aim. There were things I saw when I was out there in the combine harvester and I thought, yeah, I could do this a whole lot better,” he said.

The Watsons have won numerous farming awards, including Lincoln University’s ‘South Island Farmer of the Year’ Award and the ‘Supreme Award’ in the Canterbury Ballance Farm Environment Awards.

They bought their farm in 1992 and with the help of one staff member grow a wide range of crops for seed production, including cereals, grasses, vegetables and pulses.

With a focus on detail, the couple are pioneers in the field of computerised variable rate irrigation ensuring crops get the exact quantity of moisture required without wasting water.

Healthy soil is another focus area with regular nitrogen testing aimed at minimising fertiliser use wherever possible.

The couple constantly try to improve farm performance and describe their business as a clear partnership that shares strategic planning and overall management.